You Guys Are Just Mean

You Guys Are Just Mean is an internet meme that shows a man sitting as a slide is being projected on a whiteboard beside him, at the bottom of the slide are the words "you guys are just mean". Creators will change the text on the top part of the slide, occasionally the word "mean" is also changed. Fans use the meme to humorously depict characters or uncommon opinions in fandoms. The origin of the meme is unclear, but it seems to surface in March 2018. Some fans may have encouraged others to use this meme instead of the Change My Mind meme that some found controversial.[1] 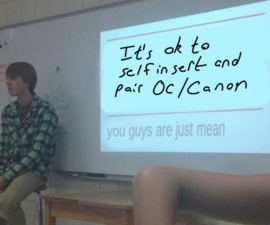 Example of meme highlighting the opinion of OCs in fandom