WishfulShipping is the name for the romantic pairing of Cilan and Iris in the Pokémon anime.

Many PokéShippers, Advanceshippers, and PearlShippers support this pairing since they don't want Iris to be with Ash.

Because pairings in the Pokémon anime very rarely become canonical, fans often debate about possible romances occurring off-screen or that may occur in the future. WishfulShippers have collected "evidence" from the various seasons of the anime as well as the official movies to support their pairing. For a complete list of "evidence," see Shipping:WishfulShippers at Bulbapedia 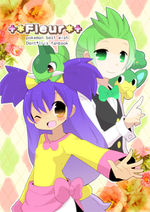