What Do You Do With a Drunken Vulcan? 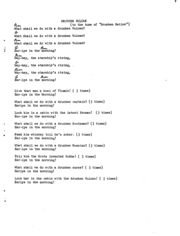 What Do You Do With a Drunken Vulcan? is the very first "vid." It is a slideshow made of film clips set to a filk song and created by Kandy Fong.

It was first shown at a Star Trek fan club meeting in 1975. It was shown to a much wider audience at Equicon in 1976.

From a fan's notes:

The history of fanvids, like many things in any fandom, can be traced back to Star Trek. That first vidder, Kandy Fong, had access to film literally from the cutting room floor from the original series. She made slides from the film and created slideshows set to music starting around 1975. The first one was set to a filk song, What Do you Do with A Drunken Vulkan. Some of these shows were videotaped for Gene Roddenberry in the mid-1980s, giving us a record of what could be described as a performance art form. [1]

As far as the date is concerned, my first show, which included 'what do you do with a drunken Vukcan', was done for a ST club meeting 1975 [2]. Then, the following year that was shown at the last Equicon/Filmcon 1976. (where I met Roddenberry and got his permission to do more slide shows) Shortly after that, I was invited to show the first show at another con & did 'Both Sides' to make the show half an hour long. 1980 seems late for the date. I really wish that I had put a date on it when I made it.... [3]

There was a popular filk song 'What do you do with a Drunken Vulcan' and I suggested that we pick out pieces of film that seemed to go with the song. Several of the club members & I used a cassette to record the song. John made the film pieces into slides so we could show it at a club meeting. I would follow the words along in a script & "click" the single projector at certain words. It was very popular. [4]

There are several different dates for this slideshow cited in various places, some of them incorrect.