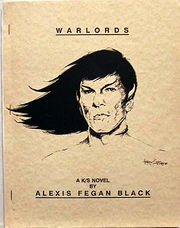 Warlords is a K/S slash Star Trek: TOS novel by Alexis Fegan Black. It was published by Pon Farr Press in 1991 and has 109 pages. It is slavefic.

In order to thwart those who would photocopy this zine without permission, it was orginally printed on bright green paper. If you have vision problems, this may be hard to read.

From the zine: "If you purchased this zine from anyone other than the editor (Alexis Fegan Black), publisher (Pon Farr Press), or her authorized representatives (Laurie Haynes, Laura Campbell), you are doing a disservice to fandom and to yourself. Please, think twice about supporting zine pirates! They are not doing you any favors."

From Media Monitor: "A haunting and chilling Kirk/Spock novel... dealing with Pre-Reform Vulcan as well as Star Trek Time. Set in the distant past, interlinked with the distant future, it is an exploration of the eternal love between Kirk and Spock, a love which lives on in many levels of reality."

“You are drugged,” Spock commented, disgusted by Orion methods. “Look at me.”

The human did as he was told, though with obvious reluctance and a trace of very real defiance.

“What is your name, little one?” the warlord asked, unable to ignore the compassion as it welled through him. In physical contact with the human, he couldn’t help picking up the strains of fear and humiliation. “No harm will come to you,” he reassured. “Now – what is your name?”

As the silence thickened, Spock wondered if the other man had lost his ability to speak. Then, drawing a deep breath, the human’s green-gold eyes hardened.

“You mean no harm will come to me if I’m good under the furs, don’t you?” he asked.

Spock’s brows lifted. Never, in all his carousing of the brothels, had he encountered such a truculent human slave. Yet, somehow, he found it intriguing rather than insulting…

The artwork is very minimal but nice. The cover by Pat Horowitz is an interesting face of Spock, the title page picture by Virginia Lee Smith is an interesting warlord Spock, and the Chris Soto on page 66 is a gorgeous Kirk. Her Kirks are wonderful. Soto has another gorgeous picture on page 13, a Vulcan named Steel. Besides the art the 109-page story is interesting, involving both time travel and reincarnation. It's the old story about Vulcans back in the days of the warriors and guess who turns up as a slave???? You guessed. The story is different in that Spock and Steel's relationship is complex. And Steel's relationship to Kirk is very different. There are various rituals. The plot has various twists. The present day Spock and Kirk have their problems, and through a look at their past they come to some answers. I recommend this. Actually, there isn't much explicit sex at all. I only mention this in case you only like stories for the sexual descriptions. There is sex, just not long passages of it. There's more plot and psychological exploration in this. [1]

Right paced. Absolutely right. The spark detonates immediately. It holds my attention from the beginning and raises it as I read on, and captivates me until the final word. The story is not a totally unusual one. It is an AU story similar to others. But it is the way that A.F.B. works it out with a message about K/S that causes me to understand the real meaning. There is not other story which has ever touched me so deep inside. The author abducts the reader with her way of speaking in an absolutely wonderful story. I wouldn’t have missed it. [2]

Slow paced. Too slow for my taste. It failed to hold my attention and what never happened before, it didn’t even stir an interest in me. The spark was missing. [3]