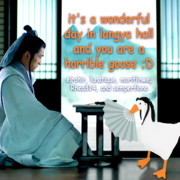 Cover art for it's a wonderful day in langya hall and you are a horrible goose by lunatique, morifiinwe, Rhea314, semperfiona, and Elrohir (2021)

Untitled Goose Game is a 2019 video game by indie developer House House. The player takes on the role of a goose causing chaos in a small English village. The game has been praised by both the gaming press and the general public, citing creativity and charm.

The player can control the goose but has a limited number of actions. The goose can carry or drag things in its beak, flap its wings, or honk. Interacting with various objects in the environment leads to different reactions from the other characters, who will almost always try to stop the goose or chase it away. Each area of the game comes with a checklist of tasks to accomplish, such as making the village inhabitants perform certain actions (e.g. "Get the farmer to put on his sun hat") or orchestrating specific conditions.

Untitled Goose Game went viral upon the release of the first trailer due to its premise. This gave way to the rise of numerous memes on social media.[1] In addition, due its simple but silly premise, many fanwork creators have created crossover fanfiction, fanart and memes. The majority of works on the game's AO3 tag are crossovers[note 1], with crack fics being popular.

The game's tagline, "It's a lovely morning in the village, and you are a horrible goose" spawned many variations within other fandoms, with fans replacing "village" and "goose" with characters and locations from their own canons.