The Ultimate Slash Madness Tourney is an annual internet poll hosted by the gay media site TheBacklot.com (formerly AfterElton.com) that is very popular among slash fans on Tumblr.

The poll is designed in the style of the annual "March Madness" U.S. college basketball tournament. Fans are instructed to vote for their favorite slash ship over the course of several rounds.

The first tournament was held in 2012, and Derek/Stiles from Teen Wolf was declared the winner on September 24, 2012. The second tournament began nominations on July 13, 2013.

The poll was started after Derek/Stiles was disqualified from a similar shipping poll hosted by EW.com.

The response from the fans have been overwhelming. According to the statistics provided by AfterElton, 4.7 million votes have been cast[1].

Surprisingly (because everybody really expected a wank), the interactions between the shippers remained friendly across platforms. It's possibly due to the fact that majority of fans ship multiple pairtings, some of which were competing in the Tourney.

After Derek/Stiles Sterek win, the interactions didn't change. Sterek and Destiel fans remained friendly and supportive of each other[2][3][4]

A lot of cast and creators tweeted out their support for "their" pairing. 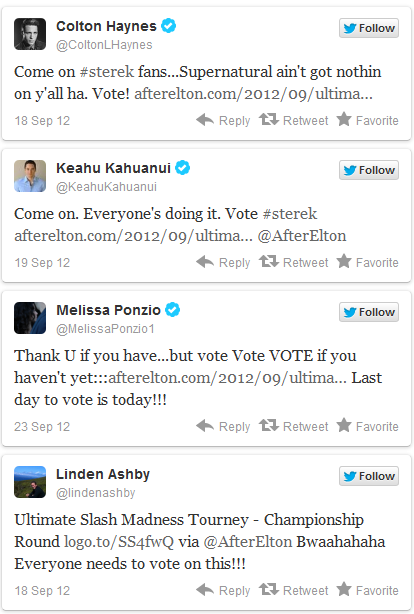 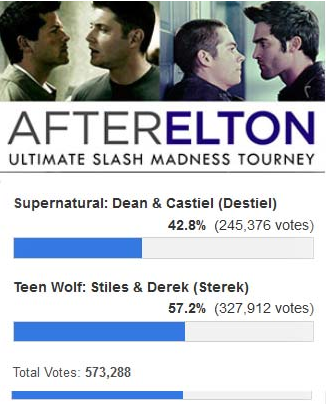