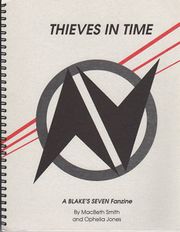 Thieves in Time is a slash (mostly Avon/Vila, some Blake/Avon) Blake's 7 172-page novel in the form of a series of 22 stories by MacBeth Smith and Ophelia Jones.

One piece is a Darkover crossover, and one piece may have been published in Songs of Experience.

The series also had several sequels, also in the form of short story collections, but most of them were lost (except for Black and Blue series.)

From an ad in GAZ:

When a six-year old Vila saves a six-year old Avon from kidnappers, he sets off a chain of events that leads the two through an early friendship/love affair and into space. After Gauda Prime, the two head for a planet where their love is accepted, founding a merchant dynasty that reaches across the stars. Yes, Blake, Cally, Jenna and Blake's clone play major roles.

Attention Avon/Vila Fans! Thieves in Time has it all! Mystery...romance...comedy...adventure...violence... If that isn't enough, how about a couple of cute six-year-olds named Avon and Vila meeting for the first time...Avon time traveling to the Liberator as a fourteen year old!"...

"Do we have your attention now? But wait, there's more! 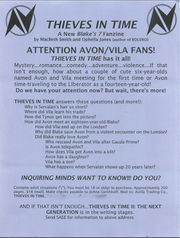 THIEVES IN TIME answers these questions (and more!):

Why is Servalan's hair so short?

Where did Vila learn his trade?

How did Tynus get into the picture?

How did Avon meet an eighteen-year-old Blake?

How did Vila end up on the London?

Why did Blake save Avon from a violent encounter on the London? Did Blake really love Avon?

Who rescued Avon and Vila after Gauda Prime? Is Avon telepathic?

How does Vila get Avon into a kilt?

Avon has a daughter?

Vila has a son?

What happens when Servalan shows up 20 years later?

INQUIRING MINDS WANT TO KNOW!!! DO YOU?"

From the Author's Notes in the zine:

"One evening, as my writing partner and I were playing yet another game of "WHAT IF," it suddenly occurred to me... Oh my God, we've created a fanzine!

Having been in various fandoms for more years than I want to think about, starting with TREK, SW, and the discovery of B7, I understood. With stories in various fanzines (under other names, of course), I knew what would happen and I warned her. She didn't believe me (heh heh).

Then, said writing partner acquire a pair of fanzines at a local CON (said zines being of the SLASH variety) and said writing partner jumped in with both feet, hands and every other body part she could fit. The rest, as they say, is history. You now hold history in your hands. ENJOY!"

... Thanks to our husbands who, though not understanding the attraction we had for Blake's Seven and slash, supported us anyhow, even when we decamped for Blakeland without leaving a forwarding address for the dirty dishes and the laundry to be mailed to!"

From the later notes by MacBeth Smith:

With my co-writer, Ophelia Jones, I am the author of Thieves in Time, a Blake's Seven AlternateUniverse novel, AU only in that it began way before canon, threaded its way through canon, and went way beyond canon, covering Avon, Vila, and other characters from age six into their eighties. Published by Avilla Trading Company (that means it came from my clunky old computer and was printed and bound by hand at Office Depot!) in the early nineties. It enjoyed respectable sales in the Pacific Northwest, most notably at Virgule, a small slash convention, and Anglicon, a British media convention. Both were in the Seattle area. Virgule is defunct and sadly missed. Anglicon has started up again, after a long hiatus. The novel has been out of print for over 20 years except here.

Like the Torchwood fans who, appalled and upset at the end of Season 3, wrote their own endings, work-arounds, and fixes, Blake’s Seven fans had a similar response when their favorite characters were annihilated at the end of Season Four. I’m told it came without any forewarning on Christmas Eve. Thieves in Time is the story my friends and I came up with to get inside the heads of our favorite characters and to fix the slaughter on Gauda Prime. When we sold the novel, principally at conventions, we warned all our buyers not to start reading it until AFTER the convention. We heard, over and over, from those who didn't heed our warning, that they'd spent most of the convention reading Thieves, instead of going to panels and parties and celebrity events. It just seemed to grab the readers and not let go until the final page. I hope the same still holds true here.

This author also summarized what was happening in the lost sequels:

There is at least one other story in this AU, called ‘Althusiak’, a story about Evan and Lerrys, which might see print in the future. All the other stories written, conceived, and bandied about, remain lost forever.

As you saw in the Family Tree (part one of 'Into the Light'), there are characters who were meant to be encountered in the second through fourth volumes (Masquerade, Grand Tour I, and Grand Tour II), namely Torr's other children and Blake's son. There were also the romances between Gabriel & Liva and Evan & Lerrys. Previous to Lerrys, however, there was another romance for Evan, while he, as the eldest male of the house of Avon, was serving as a cadet in the city guard. That young man's name was Silva and he died in Evan’s arms. Lerrys, who resembled that young man but was four years younger, comforted Evan and eventually they bonded together. Those stories, however, were never written or have been lost over the years. Gayan, Vila's son, found Vila after Gayan was an adult and he eventually brought them his son Gabriel, named after Vila's lost sister Gabriela. There was never anymore to Torr's other children than that Roman was male and Bara female, both older than Evan.

Masquerade was to be the second volume, a huge sprawling story set on Avilla. It was about a celebration and festival, complete with merchants from around Darkover as well as from space, dances, and people from everywhere. Avon and Vila ruled the gathering, as the hosts. It turned into a disaster and a mystery. Saboteurs set a prairie fire, meant to sweep over Avilla, killing and destroying everything in its wake. Avon took charge of quelling the fire, with the help of Gwen's tower. In the confusion, though, Vila disappeared. When they found Vila's horse, burnt and dead, beside a charred body, Avon thought the worst, but all came out well in the end.

Grand Tour I was the third volume, the trip Avon and Vila promised Serran, when she got to see the worlds of her fathers and mother. It was also the time they encountered Matthias, the spitting image of Blake but a more stable personality, with the charisma of Blake and his passion for freedom. Though the young man never heard about his father from his adoptive parents, lieutenants in Blake’s army, he went on, through his music and his leadership, to finally bring about the fall of the Federation.

Grand Tour II had the entire family leaving Darkover for a tour of Avilla Trading Company's holdings. The ship was captained that time by Gayan Villson, Vila's only son. Their ship was fantastic, built to their specifications (from the fantastically creative brain of Kyros Starr) and a wonder to behold in every port of call. Their adventures ranged from the comedy of finding out that Avon got space sick in free fall to witnessing the fall of the Federation, accomplished on the back of freedom songs from Blake's son.

Black and Blue, a collection of short stories, was intended to come out after Masquerade. Black and Blue is well named; seldom does a story finish without one or more of the main characters' dying or being severely trashed! These stories include: Assassin; Home is the Rebel; No Way to Go; Tatters; Theon, Past, Present, Future; Veritas; Scorpion; Arrow of War, Shock Wave, Storm, Fever, and Ghost. [1]

The summaries are written by MacBeth Smith.

And now, THE VERY WORST ZINE I HAVE EVER ENCOUNTERED (I'm not going to mention Southern Comfort 7.5, the long Avon/Tarrant story in which put me off Tarrant (a character I like) for a good three weeks after I read it): THIEVES IN TIME, published by Avilla Press. An A/V slash novel that follows our heroes (and their numerous offspring) to the ends of their lives, and includes a wedding scene with Cally playing a Roberta Flack song (the lyrics to which are all included, a fanfic device I find particularly irritating, especially when I hate the song--writers should be able to get create atmosphere and generate emotion without having to lean on a popular song, or poem, written by somebody else; a tastefully chosen epigraph that comments on the story is different, but stuffing in a song or poem in order to tell the reader what the emotional timbre of the scene is, is puerile; and it's even worse when one of the *characters* is supposed to be reading or singing or thinking about this "ancient song from Earth", unless the writer has tongue firmly in somebody's cheek). THIEVES IN TIME had me laughing myself silly in between bouts of goggling with disbelief at the ever-more-amazing cliches that the writers (whose names I have forgotten) came up with. [2]

And speaking of "barf bag" stories. You A/V people can shoot me--but I frankly did not like THIEVES IN TIME. I gave my copy of TIT away because I was embarrassed to sell it, even after I paid $18 for it! (This doesn't mean it's bad; it just means I didn't like it. I really didn't.) [3]

For me, B7 works best when it has both Blake and Avon. I despise Mary Sue's, elf and unicorn stories (but I love "What Are Legend"), stories with tons of original characters & just a dash of B7, the "Avon-as-a-god-who-can-do-no-wrong" stories, the "Blake-as-stupidier-than-a-turnip" stories, and Blakeless stories/zines. Yes, give me S/M any day over Vila as elf who saves the day. Give me "Open All Hours" anytime over THIEVES IN TIME (Blake is stupid and eventually dead - although the clone survives and does get a page or two at the end, as well as Jenna as a possible replacement for the dead Rashel) [4]