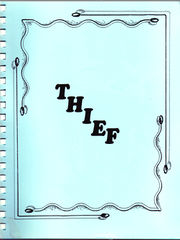 Thief is a slash Star Trek: TOS 45-page novel by DVS. This was also published in the zine Lovers #1.

From an ad in The LOC Connection #40: "LOVERS 1 -- will be a zine containing stories from four different (H/MC, UNCLE, B/D, and K/S) fandoms. Cost will be approximately $15, ready about June. However, for those who only like K/S, the K/S story "Thief" can be had for $5 (price includes first class postage, USA.) Story, by DVS, is approximately 45 p.-ges long, cover border by Gena Delapenia. "Thief" is ready now."

From the Editorial in Lovers

This is dedicated to the Out of Bounds crew, who put out marvelous zines down there in Texas... One of the last zines this intrepid crew put out was called Gypsies. Tramps and Thieves. A fan, who is in my notes as T.G.K., whom I have lost track of during the years, pointed out to me that there wasn't a single story about a gypsy, tramp or thief in it. Which is one of the reasons this story exists. I got to thinking about it... By the time this story was on paper, OOB was OOP, and so the story was eventually picked up by Eccentric Orbit. (That has to be one of the best titles for a slash zine ever invented! EO, however, never got launched, so I'm also dedicating this story to all the great zines which never got beyond the planning stages. All that happened back in 1985/1986. It explains why I have a K/S story in this zine even though it has been 4 years since I wrote a K/S story. K/S was my first slash fandom, and I like the idea of beginning a zine with it. K/S is for beginnings. I went on to other fandoms just because I wanted to play with other combinations, but I still read and enjoy the K/S. This story is longer than the first version. I have discovered that I can NOT type a story of my own without editing as I go. I am hoping I improved it. There's white-out all over the copy I typed seven years ago. Technology has changed so much! And hey, there's still a story about a gypsy and a story about a tramp somebody needs to write!

I thought the characterization was excellent, and the background very convincing. In fact, I would have preferred to see the story go on longer so I'd find out more about this alternate Scotty, Janice, Sulu, and Chekov. Kirk's getting across an escape plan to Spock mentally is an excellent use of touch telepathy. I wish K/S writers remembered to use it more often. Many of the metaphors that DVS used in the sexual passages were wonderful, and added to the eroticism, but calling a cock "a dull knife" seemed anti-erotic to me. I did wonder how Kirk could put any energy into sex when he'd just fucked Spock. He should have been exhausted at that point. Only Vulcans are that tireless. I thought the ending was cute, but then I'm fond of metaphors that are about stealing.[1]

I thoroughly enjoyed this A/U story which featured a Spock who was calm, collected and yet unsure and very much alone. Kirk was also a mixed up character, full of contradictions. Seemingly a street-smart, know-it-all thief, who underneath was full of vulnerability and pain. This was a Kirk who had experienced all the bad breaks in life and was doing the best he could under adverse circumstances, bartering even his body to try to pull his way out of a difficult life. Not that this story is a "downer" — it just explores the seamier side of some peoples existence. It was very fast moving and the almost 45 single-spaced pages seemed to zip right by. A few scenes I especially enjoyed: - the aborted "Kirk wants to screw Spock while the others watch" - I liked Kirk trying to make mental contact with the Vulcan - Spock, glad to be rid of T'Pring when she asks permission to go to Stonn, yet afraid of what his future might hold. - the hurt, disappointment and calculation that crosses Kirk's face when Spock comes to him and asks "How much do you charge?" - And later, when Spock tell Kirk "My mind wants to be complete. It wants you." Good writing, interesting story, topped off with a great sex scene — what more could you ask for? [2]

This a/u novella contained the author's usual strong sense of place and setting. It's also one of the few a/u stories where I felt that at least one of the characterizations was accurate, in this case Spock. He had an innocent naivety about him which, thankfully, wasn't to his detriment. I had a little trouble with Kirk, though could probably excuse part of it because he was so young and a product of the streets. My main problem was that he seemed to trust Spock's goodwill efforts a little too easily. I felt that Kirk should have been more suspicious of the Vulcan's benevolent intentions. I found the ending somewhat disappointing in that it seemed overly trite. With all the information that was given throughout the story about the various companies— and enemies — and how they operated, I was expecting more to happen involving these various details. But they seemed to serve no purpose other than to help enforce the sense of setting (which, again, was admirably strong). There were a few details that I admired for their originality. It was a wonderful move on Spock's part to "give" T'Pring to Stonn so the latter wouldn't die from pon farr, thereby jeopardizing his own future. I also liked it, near the beginning, that Spock could tell what Kirk was thinking by listening to his heartbeat and breathing. One detail I had trouble with was during the sex scene and is a pet peeve of mine. Right after anal sex, they have oral sex, with no washing in between.... This novella was captivating, and upon reaching the end I wished there would have been aore to it. Or, at least, a sequel...? [3]