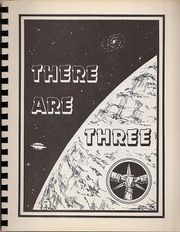 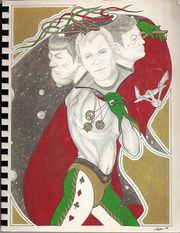 front cover by Suzan Lovett, the back cover is blank

There Are Three is a gen 152-page Star Trek: TOS anthology edited by Ingrid Cross and J. Tullock.

The stories all focus on the Kirk-Spock-McCoy triad.

no big secret that we do things differently down here in Louisiana. Odyssey's home is in the misty bayou country, after all: swamps, Cajun French, ancient, glorious live oaks and Mardi Gras.

This is a place where old and new are.meeting and creating something unique all the time. That's why we chose to say of There Are Three, "Kirk, Spock and McCoy - the way they are, the way they used to be." We asked Suzan Lovett to reflect that spirit - as well as the spirit of Odyssey - in her cover. She did so to absolute perfection. She could have read our minds. We owe Suzan an extraordinary debt of thanks. Not just for believing in the project, but for understanding what we're about. For listening, and giving back tenfold. Kate Maynard understands, too. In fact, where Odyssey Press is concerned, she has a will more forceful than the captain, an eye as precise as the Vulcan, and a warmth of insight that puts McCoy to shame. This zine is her accomplishment. The many contributors of art, fiction and poetry have joined together, cooperating with us in a most gracious, patient and enthusiastic manner. There Are Three is, indeed, a Mardi Gras zine - complete with its disguises, its color, its love of living, and its self-knowing appreciation of the ludicrous. Star Trek fans know how to enjoy, and it's certain that the spectrum our contributors - from Nora Jeffrey and her fine poem to Barbara Devereaux and her witty, open-hearted view of it all - give a great variety. Too many to name here, we thank them all for their faith in the project. Each is a connoisseur of Trek. They show us their view enthusiastically. Of special note this time, we'd like to thank Susan Weeks and Sandra Cook - two fans who dropped out of heaven into our thankful arms and have renewed our faith - in Trek, in ourselves and in mankind. They have played a major role in Odyssey Press' development this past year, and have a special place in our hearts for all this and much more.

We invite you to share the enthusiasm displayed in There Are Three for Star Trek and hope it brings you a little closer to ideals Trek is famous for.

Some summaries below are from the Zinedex. Others are from The McCoy List.

"There are Three" published by ODYSSEY PRESS is actually K&S&Mc, strongly focused on the friendships between the three characters with no sexual content. Some h/c stories e.g. set after the Empath episode, some poems, art. Tender and lovingly. [1]