The Temple Jewel is a het and slash 97-page Star Trek anthology. Four of the nine stories are slash. Five of the stories star Julian Bashir.

The art is by Maryann Jorgensen, TACS, and Janis C. 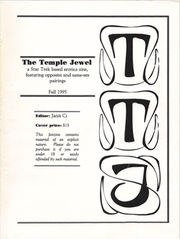 A sister zine by this editor was The Glass Floor.

From the Editorial and Submission Guidelines

Welcome to The Temple Jewel!

You probably know Cindy and me from our other publication, The Glass Floor. Well, when we began to solicit submissions, we realized two things rather quickly - that we wanted to keep the zine at an R rating or less, and that this unfortunately meant that we had to turn away some wonderful explicit work!

If you are familiar with The Glass Floor, you know that we took a rather unusual approach to publication -- not only was fan fiction welcomed, but probing and political nonfiction was also heartily encouraged and solicited. So far. The Temple Jewel has accepted fiction only, but that may change in the future. After reading some excellent work on the social and psychological appeal of explicit fiction, specifically slash fiction, I am quite open to accepting such treatments in the future, should we receive any! So if you have any opinions as to the appeal of erotic fiction or how it relates to controversial issues of modern culture, then pull out your keyboards, because I want to hear from you!

A fanzine always reflects the tastes of its editors, and The Temple Jewel is no different. Many editors prefer straight pairings only, or lighter stories. Others will accept stories with minimal plot past the explicit action. The Temple Jewel takes a middle-of-the-road approach to some of these issues. While I do prefer stories that have plots past explicit sex, I lean more heavily toward character-centered plots, which seem to involve very explicit action. As well, I tend to prefer moodier stories with a somewhat dark atmosphere (although for lighter stories, check out "Dreams," a charming work by the pseudonymous "Marquee" included in this issue, and "Musical Interlude," by Jennifer Peters), something you'll doubtless notice as you read.

Many editors do not accept slash pairings (same-sex couples, most often male-male although not exclusively); at The Jewel, I have a firm policy that judges all couples (or triples, or quadruples, or ... ) strictly on the basis of character plausibility only. The sex of the participants is not a stumbling block for me, as I am very much in favor of gay and lesbian rights, and do not feel that the 24th century should be heterosexist! (Besides, they're some of the hottest stories we've seen.) As a result, I will probably be more disposed towards a Bashir/Garak or Dax/Kira story than a Kira/Garak one, even though many editors might feel the other way! (In this issue, I've accepted two marvelous B/G stories, in fact - one by Karen Colohan and one by Mary Eichbauer. If you are at all familiar with the Internet ~ specifically Usenet - you may recognize both of these names.) So if you have a story centering on a male-male or female-female couple of any kind that you believe in, let me know! If I don't accept it, you can rest easy knowing that it wasn't for heterosexist reasons.

I am also fairly firmly feminist although obviously pro-some forms of sex entertain ment-forwantofabetterword~inmy political leanings as well, so unless that story about Gul Dukat and the two bouncy slave girls is really really well-written, you just might want to submit it to another zine. (Not that I'll start spouting left-wing rhetoric at you; I'll just stick my finger in my throat and make rude noises.) And token refusals ~ where "no" means "maybe" ~ on the part of the female characters are strongly discouraged.

Other storylines to avoid are those that attempt to portray rape as pleasurable in any way for the victim, or those that involve children or animals, neither of which are really able to offer consent of a sexual nature. BDSM is absolutely fine, but graphic mutilation or horrific rape is most definitely not. For an excellent example of this, see Mary Eichbauer's delicious B/G story "Trial And Error" in this issue. Hurt/comfort is also fine, but try to extend yourself beyond recuperation from the " flu, or simply beating the snot out of the hero before the heroine saves him. Think creative!

And there are always many other zines to which you can submit your work if it doesn't fit our needs, so don't be discouraged.

Summaries are from the zine flyer: