The Song of Shadows

A Song of Shadows is a explicit het Shadow Chasers novel by Susan Rossi. It is 111 pages. It required an age statement to order. 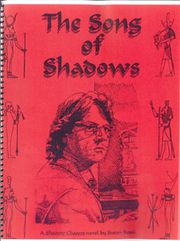 From a distributor, Agent With Style: "A mixture of vampires, witches, ancient Egyptian queens and modern shadow chasers makes for a fascinating tale. Can Benny stop a reincarnated lover from pulling Jonathan back under her power, or will jealousy and a wounded male ego separate them forever?"