The Progress of Sherlock Holmes 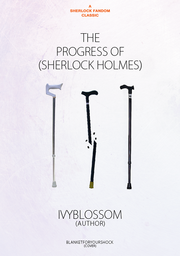 The Progress of Sherlock Holmes is a long, intricate Sherlock/John fic by Ivy Blossom. Notably, the story includes John's marriage to Mary Morstan, John Watson's wife in several of the original Arthur Conan Doyle stories. In contrast to many popular fanworks, Ivy Blossom does not portray Sherlock as sociopathic or asexual; he is merely a shy, relatively misanthropic genius. The fic pays a good amount of attention to the psychological motivations of each of the characters, weaving a complex web of relationships built (in part) on the ways each character is "broken" and how they must work to understand one another.

The fic was originally posted as a WIP series of fics;[1] the first story was called Anchorite.

The author provides the following summary on the Archive of our Own: "Sherlock is head over heels for John, but you wouldn't know it by looking at him. First-person present-tense series of short scenes from Sherlock's point of view, borrowing heavily from Arthur Conan Doyle's stories."

The Progress of Sherlock Holmes is immensely popular within the fan community. In its first three weeks on AO3 in March and April 2011, it garnered enough "hits" to put it in the top 60 most-viewed works in the Sherlock fandom (of the more than 1500 works in the archive at the time). This is despite the fact that many of the chapters had long been available elsewhere as a work-in-progress, and are still available on the author's livejournal and dreamwidth accounts.

Out There recommended the piece on the AO3 on April 2, 2011, writing: "It's long and absorbing, but the style is immediate and personal. Most Sherlock POVs almost work for me -- as a version of Sherlock, a possibility -- but this one was Benedict Cumberbatch's Sherlock, the Sherlock I see on my screen and can imagine smiling and running after danger and moping around Baker St. ..."[2]

Another reviewer wrote of the finished work: "I think this will become one of the fandom's big core stories - along with Loren Ipsum, Paradox Suite etc etc."[3] 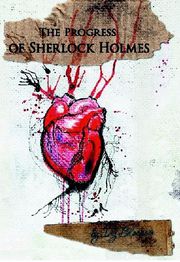 unaccredited cover for the printed version of the story

The story was made into an eight-hour podfic by cellardoorpodfic for Amplificathon 2012.[4]

The story was also translated into Italian, Spanish, Polish, German, and French. See the notes at the beginning of the fic on the AO3.

I don’t know if this was the first Sherlock fic I read, or just the first one to knock my socks off, but I always think of it as my “first” Johnlock fic. I watched Sherlock when it aired and considered myself a casual fan, but how I got from there to shipping Johnlock with the passion of a thousand fiery suns is all due to fanfics like these. It just because inconceivable to think that they might *not* end up together. ivyblossom does an amazing job communicating Sherlock’s erratic inner monologue, and the complexity of her characters, especially her Mary and Mycroft, is breathtaking.[5]

"Take a chance on the first-person present tense narration – it’s well done and you get to exist in Sherlock Holmes’ head in a fabulous, unique way. It’s incredible that Ivy Blossom pulled off that technique for 60,000 words and it never grew cumbersome. This fic is different in kind from most Johnlock romances – half character exploration, half slowburn romance, this fic gets deep into Sherlock’s head and lets you revel in it. We worked on Saturday for this one, just because we wanted to give it its time and read it slowly and we were glad we did. Thoroughly engaging, beautifully narrated, and with a squee-worthy, stunning finish, this is one of the greats."[6]
From Fanfiction Recommendations' website