The Magician's Apprentice is a Qui-Gon/Obi-Wan 92-page fantasy AU written by Rushlight.

It has a sequel, The Dragon War Chronicles. 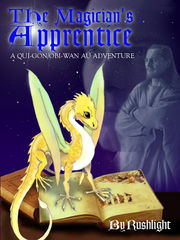 From an unknown source: "In an alternate universe of sorcery and dragons, a young man sets out to find a Master to train him in the ways of Magic. Explores the glory and magic of the world of dragons as seen through the eyes of magician Qui-Gon and his apprentice, Obi-Wan."

From Star Wars Zine Bibliography: "Obi-Wan Kenobi has traveled far to the capital city to request that the great mage, Qui-Gon Jinn, accept him as an apprentice and teach him to control his power in the magic. Persuaded to open his heart to the young man, Qui-Gon reluctantly agrees to train Obi-Wan. When news of a ravaged countryside reaches the capital, Qui-Gon knows that they will need al the power the magic can provide as well as the help of an ancient dragon to save the city from the certain destruction that impending war will bring. And Obi-Wan brings an unusual ability with him to aid the cause."

The story has four parts:

The hate I have for this story is so great. I'm recing it becuz it is a good read strong characterizations and description. It's much like read a good fantasy novel only with scrolling instead of page turning. The thing is I hate this Obi-Wan hate him with fiery burning passion of ten thousand exploding suns.....On the other hand I love Qui-Gon he is just so awesome. Obi-Wan is telling the story but it is a good story told very well. It's also a long story a very longggg story but it pulls you in and keep you interested so it gets rec even though I want to strangle this Obi-Wan and feed him to the hounds of the underworld. The hate I have for Boaen is indescribable. I really don't like the way sex is used in this fic but I have learned that what bothers me doesn't bother the majority of people so don't let my dislike turn you away this is a very well write story and that characters are so real you can hate them..or love them.[1]