From Fanlore
(Redirected from The Investigation Files)
Jump to: navigation, search 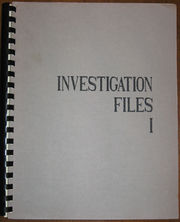 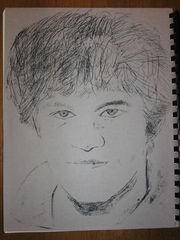 Investigation Files is a gen multimedia 180-page anthology. Artwork by Sheila Paulson and April Schulthies. Cathy Mason did the back cover. The zine has both photos and original art scattered throughout.

This zine was designed as if you are being handed a top secret file. The zine is divided into sections by show. Each section begins with a TOP SECRET page that gives the name of the show on the edge of the page. Then there is an individual "file summary" (contents page) for that show's stories, then the stories. There is an editorial file summary as well, and an "operatives on Assignment" page which lists the writers and staff of the zine.

From the editorial (by Clark Mason):

I'm not accustomed to writing an editorial page for a fanzine, but let me give it a try. In the first issue of my letterzine I said that I really enjoy the series Scarecrow and Mrs. King, and think it deserves something more than an occasional story in a media zine. I've expanded on that idea and have now put Investigation Files together....which I hope will be the first in a long chain of fanzines published by Totally Television Press. .....I know the arrangement of Investigation Files is different than most zines, but I think it is easy to understand and will be interesting and new to the fandom community. For the Scarecrow and Mrs. King readers in the audience, please notice my comments on page 79 before reading File 4-A, it may clear up any questions. Some ideas that were originally planned for this section will be appearing in future issues of Inside IFF....