The Heart of the Matter Affair 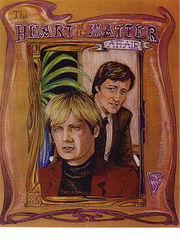 The Heart of the Matter Affair is a slash 88-page Man from UNCLE novel by Rosemary C. It was nominated for a 1992 FanQ. Color cover, and black and white interior art by KOZ.

From Agent With Style: "Thrush's acquirement of a new truth drug teams one of Illya Kuryakin's former co-workers with the New York branch of U.N.C.L.E. in an effort to find the formula. Napoleon Solo cannot help but notice the obvious uneasiness his Russian friend suffers in his old colleague's presence. Napoleon is forced to analyze his own feelings when some deeply-hidden secrets are revealed. And in the end, he must make a decision that could make or break his partnership with Illya."

Ooooo, this story made me so MAD! It was beautiful until about five pages from the end, when the author just pulled the rug right out from under you! THIS WAS NOT A HAPPY FIC! Unhappy ending alert. {Sob!} To spoil what happens for those who want to know: the story summary below:

Napoleon discovers, while Illya is drugged with a THRUSH truth serum, that Illya is gay, and is in love with him. What does the Italian stallion *do* with this information? Why, seduce Illya a few months later, ostensibly to make the kid feel better, because he feels sorry for him. As they continue their sexual relationship, which Napoleon enjoys, they are both happy for a few weeks. But then on one eventful night Napoleon realizes just how much Illya feels for him, and finds himself falling in love with Illya as well. Terrified, he leaves as soon as Illya falls asleep. Then the next night he takes out a woman and makes love to her. The day after Illya is very hurt, telling Napoleon that, "I don't mind if you want to lie to others, but don't lie to yourself as well!" At that moment Illya is sent on a solo mission overseas. As he prepares to leave, Napoleon kisses him and hugs him tightly. "We'll talk about this later," Kuryakin says happily, unaware that Napoleon was kissing him goodbye. Horrified of what he is feeling, that he could actually be a homosexual, that he could actually love a man, Napoleon decides he has to get away from Illya, that he has to leave U.N.C.L.E.

The last two paragraphs of the zine:

"Yes, when you return." Napoleon almost choked on the lie, knowing he could not be here or part of any other U.N.C.L.E. section when Illya returned.

His lips still stinging from the kiss, he watched his partner walk out of the office, aware that his life would be a much emptier place from this moment on.

I mean, really! This was one of the most depressing zines I've ever read. And there's no sequel to it that I could find. Just rip my heart out, Rosemary! Slice and dice it in front of me! {sob!} [1]

This is a well-written UNCLE Illya/Napoleon novel which comes recommended from this reviewer. The plot involves Jennings, (an English agent who once played an unpleasant part in Illya's past), Illya's "outing" to his heretofore heterosexual partner, Napoleon — plus Napoleon's discovery of his own bi sexuality.

Skillfully worked into the plot is an operation to which the UNCLE agents are assigned, which involves some exploration of a "truth" drug's effects. Illya is captured by THRUSH and forced to take the drug. Rescued by Napoleon, Illya inadvertently reveals secrets of his life to his partner.

The novel could have been a well-written yet rather conventional scenario of how Illya and Napoleon find their love for each other and then live happily ever after. But the author declines to take the "easy out" at the novel's end. Instead, she takes the reader to a heart-rending conclusion, consistent with the show's canon as well as with the way she has developed her two main characters. Koz's skillfully rendered drawings complement the story beautifully. A job well done! [2]