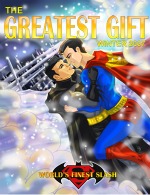 The Greatest Gift is a slash Batman and Superman fiction anthology. It was published in 2007 and has 321 pages.

Story by Saavikam | Artwork by Samibee Six months after telling Lois the truth about his identity and having no choice but to make himself scarce, Clark is absolutely heartsick over not being allowed to be a father to Jason. His relationship with Bruce is his only source of solace.

Story by Cyc | Artwork by Vespertila Christmas is a time for family, and for showing loved ones just how special they are.

Story by Cavaleira | Artwork by DarkJ3 When Lex Luthor discovers their secret identities, Superman and Batman have no choice but to spend the holidays together, stuck on a mission. But as the heroes get beneath each other's exteriors, they discover that what seemed like the worst holiday ever has turned into the greatest gift either of them could have asked for.

Story by Trascendenza | Artwork by Vejiicakes Five times Kal swept Bruce off his feet and the five times Bruce did the same to Kal. A continuation of a previously published story.

Story by ladybugkay | Artwork by Hermine_Ichigo Bruce and Clark agree to use each other for casual sex, but strings have a way of attaching themselves to the most casual of arrangements, and the boys just might end up giving each other more than they intended.

Story by Quiet Tiger | Artwork by Audz Bruce had been confusing long before he and Clark hooked up. Now he was impossible.

Story by Cyc | Artwork by DarkJ3 It's Christmas morning, and while Batman is trying to work, Superman just wants some attention.

Story by Evangelene | Artwork by Avium Ace reporter Clark Kent is in Gotham to interview the airheaded millionaire Bruce Wayne, and while he's in town, he figures he might as well check out the rumors about the mysterious Bat-Man.

Story by tmelange | Artwork by Liezl Buenaventura Batman is faced with an unintended consequence of a decision: he is bonded to Superman for life. Will he accept the change in their relationship, or will he hurt the both of them, trying to find a way out? A re-write of a previously published story.

Story by DC Lady | Artwork by Liezl Buenaventura When Lois ends her engagement to Clark Kent, a certain Dark Knight is there to pick up the pieces.

Story and Artwork by Cyc There is little room in Batman's world for escapism, and none at all for wishing for intervention from on high.

Story by vipers_in_love | Artwork by Cyc Clark Kent hates to dance. Even on a planet light years from Earth, he refuses to make a fool out of himself. Too bad Bruce is prepared to insist upon it.

Story by Arian Starr | Artwork by Nuu A threat is made against Gotham in the midst of Clark and Bruce’s first Christmas with their friends and family, and Bruce leaves to handle it on his own. When things go wrong, Clark is left to find a missing Bruce.

Story by Paxwolf | Artwork by DarkJ3 When Superman is infected by a dangerous, potentially fatal virus, Batman discovers that only he has the means to save him. This leads to revelations of a far more personal and deeper nature for both of them.

by vipers_in_love Clark is convinced there is more to his lover than meets the eye.

by tmelange On Clark Kent's first visit to Gotham City, he finds himself in the wrong place at the wrong time.

Story by tmelange | Artwork by Avium