The Female of the Species is More Deadly Than the Male

You may also be looking for the Star Trek TOS zine More Deadly Than the Male or the the Blake's 7 zine Deadlier Than the Male. 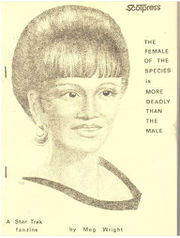 The Female of the Species is More Deadly Than the Male is a gen 72-page Star Trek: TOS zine by Meg Wright. The cover is by Ann Humphrey.

From an ad in Universal Translator #13: "A series of stories of five short stories set in a universe where Uhura is captain of the Enterprise. The first two stories were printed by STAG in Log Entries #36 and #40 and are reprinted here for continuity."

Uhura a Captain! Spock married to T'Pring! This is definitely an alternate universe. The first two chapters feature the time line change and its effects in the various participants. Our Spock gives T'Pring reason to respect her husband; Uhura finds James T. as determined as her partner. The following chapters feature Christine Chapel's ordeal, the Theta Scorpi Conference and its aftermath of treachery, out "First Contact" is the real test where men are the bosses but Kirk and Spock work to succeed in turning back 'Questor' from its collision course. All through these stories, you see the growing breakdown of Chief Maxwell - she cannot adjust to a Fleet which encourages men to have command status. A well written series, but just what is Kirk's job of Ship's Officer. His position is not made clear. [1]