The Color of Magic

This page is about a fanzine. For fandom information related to the fantasy novel by Terry Pratchett, see Discworld. 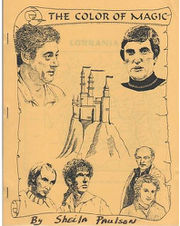 cover by Paulson and Barb Johnson 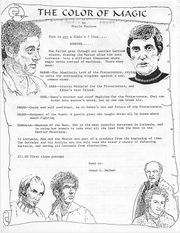 The Color of Magic is a gen 140-page AU Blake's 7/The Master novel by Sheila Paulson. The front cover art is by Sheila Paulson (the characters) and Barb Johnson (the castle). The back cover is by Suzan Molnar.

The author writes in Datazine #54: "NOT a Blake's 7 story, but uses B7-type characters crossed with The Master. Max and the Master enter a different dimension where magic works. they must fulfill an ancient prophecy by destroying the evil empress of the West."

Max Keller goes through yet another barroom window, drawing the Master after him into Lorrania. Into a different dimension where magic works instead of machines. There they meet:

RABAN — The idealistic Lord of the Protectorate, trying to.unite the surrounding kingdoms against a new, common enemy.

DARE — Cynical Minister for the Protectorate, and Raban's best friend.

CHEL — Dare's brother and chief Magician for the Protectorate. Chel can break into anyone's wards, but no one can break his.

ARRAN — Cocky and self confident, he is Raban's son and Prince of the Protectorate.

DAGAN — Sergeant of the Guard. A gentle giant who taught Arran all he knows about sword fighting.

SERRALLA — Empress of the West. She is the most powerful sorceress in Lorrania, and is using her powers to take over all the land from the West to the Barrier Mountians [sic].

In Lorrania, Max and the Master are part of a prophecy from the beginning of time. The Defender and his Acolyte are the only ones who stand a chance of defeating

Me: Finds a crossover fanzine featuring Blake’s 7 and an 80s TV “ninja” show called “The Master” Reasonable brain: This is the silliest thing I’ve seen all week. How would this even work? What do you think, fan brain? Fan brain?

captain-aralias said: i accidentally bought this zine once thinking it was a crossover with the master from doctor who. i read about 20 pages (100% true story) and then went - something is very wrong here. sheila paulson is a good writer, though, so i expect it’s pretty good… if you know what ‘the master’ (the show) is

captain-aralias said: if you actually want to know what it’s like/i.e. you haven’t already bought it, it’s not an AU exactly. cally wakes up after the andromedan war (i think) in the van.

bruinhilda said: Oh, I’ve bought it. Looking forward to reading it. And I’ve actually seen The Master! Well, those parts of it that the MST3K crew covered, anyway. [1]