You may be looking for Chameleon, a Harrison Ford art portfolio.

The Chameleons is a gen Blake's 7 54-page novel by Gillian Marsden. It was reprinted in Millennium Special. 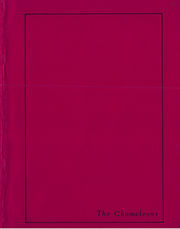 front cover of an undated edition 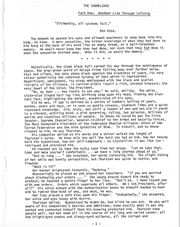 The Avon Club describes it as having a "Front cover of Avon and Tarrant."

One undated edition does not have any illustration whatsoever, and is likely a reprint. It, however, appears to contain all the original contents.

My dear friends, It is marvellous to have this opportunity to address you once again;, after such a long delay - in fact it is nearly three years since the Standard By Seven logo saw the light of day (and that of course was with the final issue, number eleven, which was printed in April of 1982). I trust you are all well, and would like to thank those of you who were kind enough to send me a Christmas card this year (and all the previous years!) - if I forgot to send you one please accept my grovelling apologies, certainly those among you who know me well, will know how awful my memory is!

The Chameleons is one of the most superb 'alternative' fifth series 'Blake's Seven' stories I've ever read (and believe you me, I've read quite a few - and it's fair to note that the most meraoriable, note the careful choice of verb, have been written by our colonial friends). It is written by the immensely talented, Gillian Marsden (you might recall she wrote the first Standard By Seven Special, 'Deadly Night Shades') and was 'proofed' by Linda Short (the remarkable lady responsible for those smashing Blake's Seven filksongs we all know and love). I've put the 'proofed' in inverted commas because it's fair to say that she was also responsible for guiding Gillian through a mammoth rewrite. The first draft was really exciting, the final effort superb, so both ladies deserve a hearty pat on the back.

The entire proceeds from this amateur magazine are going to be donated to the P.D.S.A., which is also the charity to benefit from the 1986 SPACE CITY convention (details of which can be found at the back of this magazine). Please help us to support this most worthwhile of causes - I realise that animal charities are not as popular as human charities, and for that I must express some surprise, for surely all life is sacred.

We can assure you, that's me speaking as a SPACE CITY committee member, that every penny you donate will go to the P.D.S.A. in the way of equipment, supplies etc. and we will be providing- our usual accounts for inspection after SPACE CITY 1986, plus the invoices for the goodies purchased. I would also like to advise all S.F. fen to ask any convention committee who 'alleges' to be raising money for charity, for either their accounts or a copy of the receipt provided by the charity concerned, in that way we ensure that fair play is done by all.

Finally, there are a few copies of Standard By Seven Issue Tern and Eleven available from me at £1.10 and £1.60 respectively (incl. p&p), as well as my general S.F. magazine, The Visitor 2 and 3 at £1.10 and £1.50 respectively, both incl. of p&p. Any cheques/postal orders should be made payable to Miss A. O'Neill. No cash please. Donations for the P.D.S.A. should be made payable to SPACE CITY - please enclose a SAE for your receipt - Ta. Take care of yourselves.

Available from Ann O'Neill. This is an above-average fan story, though I can't agree with Ann that it's the best PGP around. Much depends on what you like to read and this gloomy and often violent tale isn't entirely to my taste. It is 9 years after GP and the Universe has become totally unrecognisable due to very dramatic events which the writer spends a lot of time (necessarily) explaining. Finally, Avon appears and we discover that he is merely a successful crook these days, trying to keep out of the political limelight. He's arrested by mistake, recognised by Tarrant and from then on it's disaster all the may - with Avon a hapless puppet unable to control any of the horrors flung at him. We are launched into a catalogue of 'how to kill your Fed. Guard in 1001 different ways' which will delight the bloodthirsty, but the political matters slide into the background as Avon and Tarrant wend their gory way to an interesting but ultimately fruitless (of course) meeting with Servalan, If you care only for Avon and Tarrant, perhaps you'd be happy with this, but I wanted to know what happened to this new political situation which had been described earlier at such great length and I was furious when the zine just ENDED. Tarrant is the most interesting character by far, and his fans should like it. Avon fans may well feel that Avon is rather irrelevant to the tale, apart from his chat with Servalan. Vila Is sorely missed. All in all, I'd recommend it highly as a bit of quality writing, but feel the ending is weak, Avon is underrated, and Servalan's earliest trips to another galaxy seem very off-hand when you consider that even Liberator couldn't make the nearest in less than 150 years! [1]

Nominations for the Tarrant stories which are worth reading: The Chameleons.

I found this story pretty boring, until quite a long way through, Avon and Tarrant appeared, as it didn't seem to have any connection to B7 until then and is set long after Gauda Prime... during which time everything's changed out of recognition. Avon's part is poor -- he's a dreary failure. But Tarrant's part is terrific and I was devastated by the ending! Furthermore, the story stops when Tarrant's and Avon's part end and you're left fuming that you aren't told any more. So... good and bad, but for Tarrant fans it's excellent once he's in it. General writing style is superior. Humor nil, a pity. Just wish it had some B7 atmosphere. [2]

I was disappointed by many aspects of this tale as anyone who read my review will know, but at the same time it is superbly crafted technically - one of the best I have seen in that respect. It took me a long time to get into it emotionally (about half the story), partly because the whole thing (clever though the plot is) seems to have very little relationship to the B7 universe and the changes described seem inconceivably excessive for nine years or so, even 1000 years from now. Avon is disappointing because he comes over as a sad, tired loser, totally without the charisma we know so well; Vila is not included, and the writer hows no sign of a sense of humour thus a whole dimension of B7 is missing. Even the second half has faults - notably too many REPETITIVE scenes of slaughter (100 ways to kill your enemy trooper as I think I put it) while Avon and Tarrant try to fight their way out, and Avon's encounter with Servaian at the end was curiously unmoving. Then the finale is too sudden, as though the writer abruptly lost interest in the main plot: it would have been better not to introduce some issues if she intended to abandon them at the end. So, with all those criticisms, why list the story? Simply because it is a STUNNING, WONDERFUL portrait of Tarrant, Servaian is brilliantly drawn, the tragedies of Avon's alien lady and his own seedy disintegration are compellingly depressing; and the full horror of Federation rule hits you with terrible force as Avon and Tarrant career inexorably, tragically to their dramatic end. Read it for Part 2! [3]