The Captain's Log is a gen Star Trek: TOS non-fiction and poetry anthology edited by Craig Fincannon and written by Bruce Nardoci. It has the subtitle: "An Eulogy to Star Trek...."

It was planned to be published five times a year. There were two issues.

In T-Negative #12, Bruce Nardoci says he is changing the name of the zine to "The Guardian of Tomorrow" but it appears this reincarnation did not occur.

The Captain's Log 1 was published in August 1970 and contains 12 pages.

The Captain's Log 2 was published in January 1971 and contains 30 pages. The art is by Barbi Marczak. 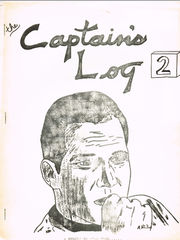 from issue #2, the editor apologizes for the poor mimeo of the first issue, and says this issue is better -- in mimeo almost too poor to read 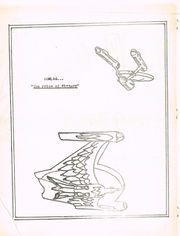 The editor apologizes for it being three months late.

From the table of contents: "This second issue of the Captain's Log is fondly dedicated to Miss Star Trek herself, our friend, Ruth Berman."