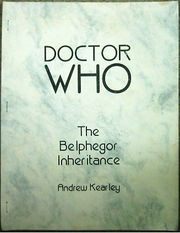 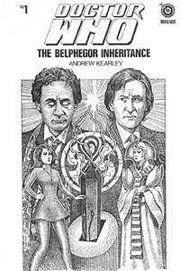 The Belphegor Inheritance is a gen Doctor Who 108-page novel by Andrew Kearley. The cover and interior illustrations are by Martin Proctor. Note: Bill Hupe's catalog refers to this zine as "The Belphegor Incident."

From the author: "1967 - A sphere of glowing energy attacks the London School of Economics. Its target is an absent minded history professor, who in reality is the next manifestation of the Doctor. Meanwhile, Gallifrey faces imminent destruction from powerful forces. Responsible is Belphegor - an evil tyrant from the darkest depths of Gallifreyan history. The struggle becomes personal as the Doctor discovers that Belphegor has possessed the body of his previous incarnation. To save Gallifrey, the Doctor must save himself... (98 000 words.)"

Andrew Kearley tells a ripping good story in The Belphegor Inheritance. Although The Michaelmas Phantoms does not quite reach the same level of quality (not surprising considering he wrote The Michaelmas Phantoms first), it too is very readable. The Belphegor Inheritance itself can be seen in many ways as a reaction to some of the more controversial aspects of the New Adventures novels and the last two televised seasons of Sylvester McCoy's era of Doctor Who. The blurb, listed in the previous paragraph, gives you some idea of the story; what it doesn't tell you is that Andrew Kearley embarks on a theory that the Seventh Doctor was possessed by an evil entity when did such uncharacteristic things as using the Hand of Omega to destroy Skaro, Validium to destroy the Cybermen, and even his unusual previous knowledge of Fenric. What is bound to prove frustrating for ardent McCoy fans who believe the seventh Doctor was in full control of his faculties, is that Andrew Kearley provides an explanation based upon established continuity in such a way that can not be discredited, no matter how hard one tries.[1]