The Archive at the End of the Universe

The Archive at the End of the Universe was a multi-fandom archive of fan fiction. As stated on the archive's front page, it: "welcomes all fiction, non-fiction and art which is based on fictional or historic sources." Members must be invited to join, and the archive adds "new fandoms and characters by author's requests".[1] 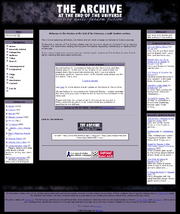 The Archive went live in September 2005. It was created by Maeglinyedi, Fluffyllama and Alchemia; Nimori created the site's skin.[3] The Archive was, in part, a response to the backlash created when skyehawke, prompted by Australia's updated child exploitation laws, restricted what kind of work they would host, and set up a review board called the illiterati.[4][5] There was also a Livejournal community to communicate with its userbase.[6] 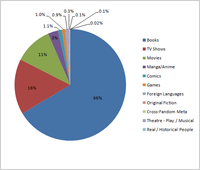 The archive allows fanfiction and fandom-related essays regardless of genre or rating for fandoms that are based on a fictional source. However, it does not allow: "fiction based on the works of persons who stand against uncontrolled fanwork of their properties, such as: P.N. Elrod, Anne McCaffrey, Robin McKinley, Anne Rice and others."

RPF of people who have been dead for at least 50 years is allowed. RPF of contemporary people is not. Chan about fictional characters is allowed. Additionally, users who have already posted fan work are permitted to archive their original work.

About 60% of the fics hosted on the archive are for Harry Potter. Star Wars makes up another 6%.