You may be looking for the Star Trek club zine The Alternative Factor. 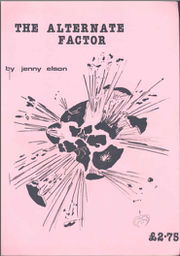 The Alternate Factor is a K/S slash 66-page novel by Jenny Elson published in the UK. The art by J.D. Tribble.

Summary from Gilda F: "A tragedy in an alternate universe, and the animosity it creates between that Kirk and Spock, threatens the bond shared by them in this universe."

ALTERNATIVE FACTOR by Jenny Elson is a K/S zine where once again, an interchange between two different universes solves the problems of an unhappy Spock and Kirk. In one universe, we have Kirk openly hating his First Officer after an incident causes Vulcan to withdraw from the Federation leaving Spock, with his mixed heritage, the only man with Vulcan blood left in Starfleet. This Kirk is an unhappy man who simply cannot accept Spock aboard his ship. He lost a close friend, Mitchell, amongst the five million who died at Vulcan hands during 'The Tragedy' and he cannot forgive the Vulcan race. In the other universe, we have our two lovers whose perfect relationship is torn asunder when the hatred of the other universe's Kirk penetrates their world. When an accident causes the two Spocks to exchange places, problems are resolved and when every one is once again in their rightful place, both couples are re-united in a happier relationship. Overall, the ideas and plot had great potential but were spoilt, I felt, by the portraits of both Kirks. I can only assume neither universe in this zine was meant to be anything like the television series. [1]