The game has no relation whatsoever to the 1959 movie of the same name. R. Talsorian Games described Teenagers from Outer Space as "the amazingly weird roleplaying game that lets you become a character in your very own (or even somebody else's) Japanese Animation Comedy Show!" Characters can be Humans, Near-Humans (like Spock, or the Cat from Red Dwarf), Not Very Near Human (like Kisame Hoshigaki, or perhaps Jaken), or Real Weirdies (like WALL-E or a cthulhoid character); nonhuman characters get up to 3 alien powers, rolled on a few simple tables. Characters have a randomly-rolled stats for which the points can be adjusted somewhat, and skills ("Knacks") which are open-ended and left to the GM's discretion—a character could have "Lie to teachers" or "Mad Science" or "Get a date" as skills. 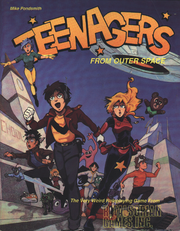 Mechanics are light in order to keep the games focused on fun interactions; realism is irrelevant. There is no death in the game; characters get "bonked" instead, being sidelined for a number of realtime minutes if they take too much damage. Characters have wildly varying power levels by any objective standard—but in this game, they're all high school students, and assumed to have all the stresses and problems of modern suburbian teenagers.

Teenagers assumes that almost everyone in the game has a somewhat stable, nuclear (or thermonuclear) family, with one Mom, one Dad, maybe a couple brothers and sisters, and split-level somewhere in the suburbs of Alpha Centauri. Sure, it's unrealistic, but you can always have a divorced Rosicrucian astrologer stepdad in real life (especially in California).[1]

TFOS remains a common game at conventions[2] because of the quick character creation and simple fun plots; it could easily be stretched or squished into any timeslot, and players who'd never seen it before could be taught the rules in a few minutes.

The rules in TFOS are so light that house rules are unnecessary. Any fudging of the rules that a group wants to do—allowing points instead of dice rolls for characters, expanding the alien powers list, adjusting combat results—is covered under the instruction to Referees: "Feel free to alter, change, add and generally mess around with our guidelines as you see fit."

TFOS was too light and wacky to have controversies. (Probably not true. But while some gamers had the reaction of "it's stupid and unrealistic!" the general response they got was, "well, then don't play it.") And while some people insisted it was not a good beginning game,[4] that mostly meant it wanted an experienced GM who could motivate players into having fun even if the world-setting provided no direct goals for them.

In the first edition, humans were pretty much worthless, and almost nobody played them. In the second edition, the rules were amended to balance the fact that humans got no special powers: they were understood to be the coolest entities in the galaxy; all the aliens wanted to be involved in human culture, know about human history, and so on; they had a reaction similar to the way Arthur Weasley obsesses over Muggle artifacts and culture.

Even with the change, few players chose to play humans; a party was usually a handful of random alien characters in clichéd high-school roles: the jock, the geek, the stoner, etc. 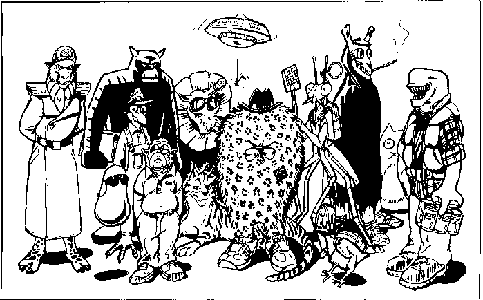 The core rulebook includes several plot ideas, formatted as if they were TV show episodes. These include scenarios like "Your alien ex-fiancee from Back Home has shown up on Earth, determined to win you back," and "A gigantic alien cat-creature visiting your neighborhood has decided to adopt YOU. Now it's dragging you around by the scruff of the neck, washing you with it's big, pink, slobbery tongue, and sitting on top of you to keep you warm," and "You made the mistake of walking into the School Office just as the Mega-Cosmo Xeroxoid 20,000 blew up! Now there are copies of you and your friends running around town, getting you in trouble!"

Crossover setting between TFOS and HOL, intended to be more realistic than TFOS (can't be hard) and less deadly than HOL (ditto): Teenagers on HOL Yahoo group and Reocities page.