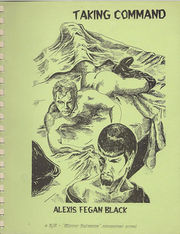 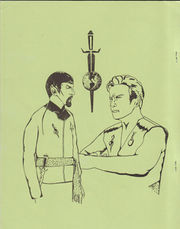 Reprinted in 5 of Hearts: The Collected Short Novels of Alexis Fegan Black.

Publisher's summary: "What if it had taken 3 days for Kirk to return from the mirror universe instead of 3 hours? A K/S mirror universe crossover novel for those who like it kinda kinky."

Kirk perused Spock pointedly. “You brought me here because you’re curious – about me, about your counterpart, about yourself. The sad thing is that you’re too damned civilized to admit it.” The word was a hiss of contempt. “You’re so afraid of letting down those guards of yours that you’d rather spend the rest of eternity with just your fantasies and your own right hand.” He frowned quizzically. “You are right handed, aren’t you?” But he didn’t wait for an answer, just gestured his own words aside and plowed ahead. “You’re so afraid of feeling something – or afraid of admitting it – that you’re determined to make me force you into it, aren’t you? You’re so arrogant and proper that I’m going to have to – ” “Stop!” Spock fairly shouted. “You will stop this, Captain, or I shall see to it that you are taken away to Sickbay, sedated and in restraints!”

An apt title and a regularly returning theme in her work. I've read the novel a couple of times because, in my opinion, there is much more to her stories then what meets the eye. An interaction with their mirror counterparts leaves both Kirk and Spock with a confrontation with themselves. If I restrict myself to the mirror Kirk taking command of Spock, that taking is shown in so much vivid detail that you ten to overtook what's happening underneath: Spock taking command of himself. The portrayal of that duality is an art in itself, whereas the first taking is being smeared broadly for everyone to see, the second one is only being hinted a. , It I take it one step further it implies also a core knowledge of the other a complete an utter trust in each other, It is a thin line where you can easily cross to humiliation and it's a mark of perception and writing skills that she doesn't do that. Any game of power is dangerous in the extreme and I think very addictive too. [1]

In this novel, Kirk has to stay for three days in the mirror universe, before he can return to his own universe.

The mirror Spock and Kirk are lovers. The mirror Kirk tries to seduce Spock and succeeds. With violence and the use of phaser-stun he rapes Spock, although you cannot really call it rape, because Spock has loved his Kirk for years ....

In part two we see what happens to our Kirk in the mirror universe. Now the mirror Kirk is gone. Kirk has to take the place of Mirror Spock's captain. Mirror Spock knows it is not his captain, but he doesn't mind. What follows is a mixture of bondage and almost rape. It sets Kirk thinking about a relationship with his own Spock.

There really isn't much story here and I do not remember much about it. It is written in Alexis' usual style, well-told but not a story to my taste. [2]

TAKING COMMAND is a sequel to the author's story in NAKED TIMES #14. In this universe, Vulcan reins over Earth yet with a gentle and understanding hand. Vulcan also realizes that their own people do not function well in command situations so they place only bonded Vulcan/Human pairs in the top command positions on their starships. Not much happens in this story except a progress from where the story ended in NT #14 to the final step of Kirk 'taking command'. This is far from a deep story, but it is highly entertaining, well written and well presented. [3]

I truly enjoyed this 104-page novel and have reread bits of it many tiaes over. This novel has bondage-type sex, not SM. If you don't like rough sex, then this book is not for you. Both Spock and Kirk have "run-ins" with their mirror selves. It proves very enlightening for the regular Spock and Kirk. They both learn, and when they get back together in their regular Enterprise they progress. This story has the mirror characters being more honest in their feelings which is an interesting view. There's a little plot besides the relationship developments. There are some very nice pieces of writing in this. I wish I could write as well. [4]