From Fanlore
(Redirected from THE BONDSTONE)
Jump to: navigation, search

You may be looking for The Bloodstone, a Star Trek: TOS zine. 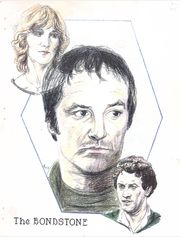 The Bondstone is a slash 73-page Blake's 7 novel written by Paula and edited by Sheila Paulson. It has a cover by Anja Gruber.

It is the U.S. edition revised version of the story in Quicksilver Rising #2.

It has a sequel called "Stress Factors" in Southern Comfort 4.75.

Does anyone here like THE BONDSTONE by "Paula"? That made a good impression on me, even the A/V bits—at least there was a good reason for it all. [1]

The Bondstone is an adult novella first published in Quicksilver Rising around 1984. This edition is slightly expanded from the original.

The Bondstone is an immensely satisfying read for anyone who enjoys stories about intense emotional states. If you have read one too many stories in which declarations of caring, tearfulness and overt vulnerability are at the forefront you might be tempted to say oh please, not again, but it would be your loss. Fans of anguish, redemption and a happy ending should not miss it.

The story is set immediately after Gauda Prime, which all the fourth series crew have survived. The essences of Cally and Blake have also survived and Vila agrees to house them in his body until clone bodies can be built to re-house them. All this takes place in the first couple of pages, and the rest of the novella concentrates on exploring the results on the various relationships, not just between Vila, Avon, Cally and Blake, but also Dayna, Tarrant and Soolin. The emphasis in the sex scenes and elsewhere is very much on the sharing/caring plane.

I read this story on the train and was so engrossed in it that I almost missed my stop. The author manages the difficult task of writing a whole series of highly emotional scenes without ever (IMHO) toppling into the grossly sentimental. If you can accept the basic situation vis a vis spiritual essences, everything that follows has the ring of truth.

Vila and Avon feature most strongly, as a couple and as part of the group bond with Cally and Blake, but the other three crew members are also well drawn and not treated - as frequently happens with fanfic where the author is interested in only certain characters - as excess baggage with a few tired cliches to mouth. The scenes with Tarrant in particular are unusually sympathetically observed .

The only reservation I had with characterisation was a very minor one; Dayna says and does all the right things with a wisdom astounding in someone so young. However someone has to say and do the right things in order for the plot to progress, and when the writing is as consummate as it is here, Dayna can be as mature as she likes. If you like stories that leave you with a nice warm sentimental glow, do not miss this, especially if you are a Vila and Avon fan. If you prefer something harsher, give it try anyway.

The author says in the preamble that she wrote a sequel "Stress Factors" which appeared in Southern Comfort, but she doesn't say which edition. If some kind knowledgeable person knows where I can find it, please do tell. [2] She also says she might one day write a third story in this universe; has anything yet appeared? [3]