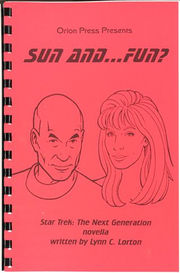 Randall Landers did the cover art using a sketch from a coloring book as a guide.

I just received my copy of Sun and Fun..? The other day, and it was a great P/C

story. Some of the emotions and dialogue were a bit overplayed, but I would

definitely recommend it as a good P/C read. [1]

In 1999, this zine caused quite a bit of discussion about the subject of print zine and netfic when this anonymous review was posted:

I just want to state first that I am posting under an alias. By doing this, I think I can be more honest in what I have to say. I would also like to say that I have been participating in this NG for a few years...as a writer and most definately as an avid reader.

First off, I'd like to say that in general, I like printed zines. I have several of them. And more than likely, I will buy a couple more in the future. But recently, I purchased a zine-novella that quite frankly, wasn't worth a dime.

I kept reading, and reading hoping things would get better. By the time I reached the end, I was a little pissed I had spent 7.75$ on what I consider to be crap. The characterizations were pedantic and unbelievable. In fact, the characters were so 'out of character' I had to remind myself (frequently) that this was supposed to be Picard and Crusher in the story. [2]

For MUCH more fan discussion on this topic, much of it quite heated, see Fanfiction: web or zine?.

[The publisher of this zine responds]: Interestingly enough, this novella (Sun and Fun...?) by Lynn Lorton is being complimented by dozens of readers as a wonderful P/C romp. I'm

sorry you didn't like it, I really am. But lots of folks DID like it. Lynn has always been a prolific writer. Her work has appeared in Eridani, Idylls and Involution, and while it was up, hers were always in the top 10 in downloads from the website.

I find myself in the role of John Ordover here, banging my head on the keyboard. One person is unhappy, and dozens are happy. But whose comments generate the most attention? The one unsatisfied customer (and posting this, I know there will be a dozen more (who probably haven't even read it) who will chime in how "terrible" it was -- LOL). You can't please everyone; you try to please most people. But at $7.75 (as compared to a $6.99 + tax novel from PocketBooks), you're not out of much money, are you?

P/C is one of the hardest things to publish because TPTB have done every thing they can to squelch it. And it's interpreted in different ways by different fans. Lynn just happens to have an interpretation that you didn't like. I'd love for you to go ahead and forge a novella, an answer if you will as to how YOU see the relationship, submit it to us, and we'll be glad to consider it for publication as well. We will gladly set it forth as an ORION PRESS fanzine, and then

we'll let the readership judge your work by comparison. [3]