In the introduction to Yesterday's Son, Howard Weinstein describes reading from the pro book at "Summer Media Fest" in 1982. 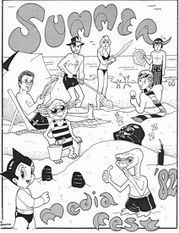 This con may be related to Washington Media Fest.

One of the guests of honor was pro Trek writer Howard Weinstein.

From the con book:

It is 19 pages long and has a cover by Gennie Summers.

Note: the fan film is spelled both "Star Wreck" and "Star Wrek."

[Here's] one more Yank's story of conversion [to Blake's 7]:

The time and place was Summer Media Fest 82, a small multi-media convention in the Washington D.C. area. Heather Nachman, whom I didn't even know at the time, had scheduled a private screening of some "Blake's 7" episodes in her hotel room, only to discover that the TV set in her room didn't work. In desperation, she asked my roommate, who was a friend of hers, if they could borrow our room for the screening. My roommate said yes, I shrugged, and I was about to head out the door, when Heather practically nabbed me by the collar and said, "Sit down. Watch this. You'll understand when it's over."

I don't know if I can convey to the British fan the experience of being jammed into a modest hotel room with well over 20 other fans, all of us staring at a hazy-blue camera copy of 'Countdown'. Someone was sitting on my feet and I was getting a crick in my neck from having to turn sideways. The image on the TV set wasn't very large to begin with when viewed from across the room. There was no colour discernible in the picture (just shades of blue), many of the visual details were gone, and the audio was noisy enough that we lost the odd sentence here and there as well. I didn't know who these characters were, or why it was so important to them to be doing what they were doing. And still I was grabbed by the urgency and the import of it all. [see the rest of this fan's comments at "Horizon Newsletter" [1]