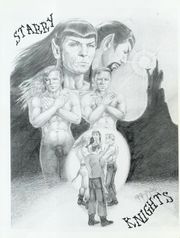 front cover of issue #1, Marianne Muller -- "This is one of the best zine covers I have ever seen because it is designed specifically as a zine cover and imaginatively and beautifully composed. There is an AU Spock next to a Mirror Spock above an AU Kirk next to a Mirror Kirk below. The faces are near perfect and Kirk’s nude body is beautifully drawn. The four of them stand together in the foreground with the full moon as a backdrop. Everything is set against an alien landscape which might be Vulcan with a bright sun. I just love it—and I’ll bet the original is spectacular." [1] 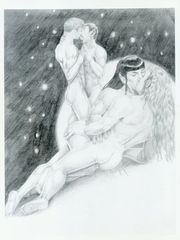 back cover of issue #1, Marianne Muller -- "Just beautiful, Marianne! While the front cover was nice, I prefer seeing Kirk and Spock together as they are in the images on the back cover. A small naked Mirror Kirk and Spock are embracing each other and kissing near the top of this cover. Then there’s a gorgeous picture of a longhaired naked AU Kirk and Mirror Spock, their bodies entwined as they passionately kiss. We see mainly Kirk’s back and the side of his face, but no worries here—I love this view of Kirk! The pictures are floating against a starry background." [2]

Starry Knights 1 was published July 2003 and contains 179 pages. It is letter-sized and perfect bound. Front and back covers by Marianne Mueller, with interior art by Marianne Mueller, Liz Woledge, R. Hood, and Karola. It is a theme zine dealing with alternate versions of the episode Mirror, Mirror.

See reactions and reviews for Mate-Lock.

See reactions and reviews for The Soul Inside.

[art]: There is also art in this zine which is adequate, but nothing that I truly fell in love with. In other words, it wasn't Suzan Lovett, Chris Soto, or Shelley Butler quality in my opinion, but I am very picky about art. [9]

[art facing page 57, Liz]: This is a quiet and tender picture of Kirk and Spock asleep. It accompanies “Mate-Lock”, and so also portrays a long haired Spock. Spock has his head on Kirk’s chest, and both look utterly peaceful and deeply asleep. I like the glimpse of Spock’s fingers that we just barely see, curling around Kirk’s neck. Spock’s lips are so well done and very sensuous looking. (Those authors who keep writing about Spock’s “thin” lips must need glasses! Sure, his upper lip is thin and stern, but oh that full and lush lower lip!) I think Spock’s hair is especially nice in this picture - there are lovely shiny highlights, but it looks so soft as it rests against Kirk’s chest. Nice work, Liz. [10]

[front cover]: This picture really gives a good idea of the combined themes of the new zine, Starry Knights. At the top of the cover is a wonderful picture of an AU Spock‘s head and shoulders with long, flowing, beautiful hair and sexy braids in front of his ears, which is next to a picture of a Mirror Spock‘s face seen from the side. Right below these two pictures is a slightly smaller picture of an AU Kirk and Mirror Kirk (presumably this is Mirror Kirk—kind of hard to tell since he’s naked in both these pictures!) Next is a small picture symbolizing the two different types of stories, as an AU Spock, AU Kirk, Mirror Spock and Mirror Kirk join hands in a circle. All this is set against a background of a mysterious structure set on top of a hill against a stylized sun. Very evocative. [11]

["Cherished" by Virginia Sky]: I love this picture. It was one of several of Virginia’s CGA art pieces that caused a bidding war at the KSP party at Shore Leave. Spock and Kirk are naked, and Spock is on his hands and knees as Kirk bends over him and kisses his lower back. There’s something about the way Kirk is kissing Spock that is so tender and loving, and made me realize “Cherished” was the perfect title for this picture. Once again Virginia has selected wonderful bodies for her picture—not too buff, but nicely muscled. Virginia uses the same technique as in the other CGA illustrations in this zine. The images are not sharp and crisp as they would normally be in a photograph, but have been smoothed out and altered so that it feels as though we are looking at a painting instead. [12]

["The Dark" by Ingela]: Remember, I am not an artist so have no idea how to describe this technique of Ingela’s. She’s used this for other pictures too, but I don’t think I’ve ever written an LOC to tell her how much I like it. The overall impression is of darkness. Much of the picture is black, and only part of the body is shown. It’s almost a reverse silhouette. This technique seems perfect for this splendid picture of the dark and mysterious First Officer of the I.S.S. Enterprise as he masturbates. His stomach muscles are highlighted through the use of this technique, and we barely see the outline of his hand on his penis, but know exactly what he is doing. This is a very sexy picture of Mirror Spock! [13]

["If Wishes Were Horses" by Marianne Muller]: Very interesting and clever title! This is not the best Kirk face Marianne has ever done, but I know Kirk is really hard to get right under normal circumstances, and it must be even harder to draw him with his face contorted with passion. And quite frankly, no one will be looking at Kirk’s face for long once they see this very erotic pose, in which Kirk is penetrating Spock as Spock, his back to Kirk, sits in his lap. Nice job with the fingers as Kirk firmly grasps Spock’s penis! An excellent Spock body, too. Just the way I like him—slender but muscular. [14]

["Love in the Mirror" by Marianne Muller]: Being a big Kirk fan, and a huge admirer of his beautifully shaped posterior, this picture really caught my eye. It’s a wonderful picture of a naked Mirror Spock with his penis partially showing as he stands and holds a naked Kirk up against him. Kirk’s legs are widely spread as he grips Spock’s body with them, and his buttocks are beautifully displayed. They are round, full, and firm, and combine with strongly muscled and perfectly shaped thighs to make an incredibly erotic picture. (Especially if you have read the story, as I have, and know what they are about to do next. Whew, time for a cold shower!) [15]

["Passion" by Virginia Sky]: I believe this picture was another one of Virginia’s CGA art pieces that resulted in a bidding war at Shore Leave. Someone has done a very good job titling this picture, too, because it is very passionate! This is another picture of a naked Kirk and Spock making love, in which Kirk is leaning back on one arm as Spock leans over him and kisses him. There’s something about the angle of Spock’s body and Kirk’s head in this picture that really appeals to me. Spock is especially nice in this picture—I love the muscles in his arms, and the curves of his back and leg. I also liked the use of shadows in this illustration. I thought this picture was intensely erotic. [16]

Some summaries are by Gilda F. 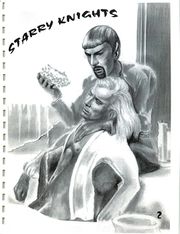 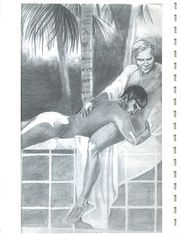 back cover issue #2, Liz -- "Oh, I do like this piece by Liz on the back cover of Starry Knights 2. It depicts Kirk sitting along the side of a swimming pool, one leg over the side and one leg extended on the side. Along that extended leg lies Spock on his stomach. His arms are wrapped around Kirk's butt and his face is pressed against Kirk's stomach. Palm trees in the background complete the scene. The best part of this piece of art is that it isn't static at all, as might be assumed from my description, but there is a lot of emotion conveyed in the expressions on their faces, in the way their hands rest against one another. Oh, yeah, Kirk's hand is resting against Spock's back. I am a sucker for beautifully placed hands. I am no genuine art critic, so don't take me too seriously, but I am going to guess that this is not Liz's most technically perfect piece of work. There seem to be lines here and there that are a bit too heavy (maybe outline lines? For guidance? I am not sure. Maybe just lines of drawing that the artist thought should be one intensity and I think should be another), and I find them a bit distracting. However, the piece shouts of intimacy, and I love that more than anything. I really, really like this drawing. Oh, and I'll add that the technique used complements the emotion in the picture. It's all sort of grays, and it works really well with the subject matter, I think. And, finally, though I know this is undoubtedly intended to convey an a/u setting (since it's the back cover of Starry Knights, which is a/u and mirror combined, and the front cover is undoubtedly mirror), in my opinion this could be our Kirk and Spock, in Starfleet, on leave. As a matter of fact, in my mind it is!" [17]

See reactions and reviews of Heroes to Each Other.