From Fanlore
(Redirected from Star Trek and NASA)
Jump to: navigation, search

You may be looking for the book NASA/Trek. 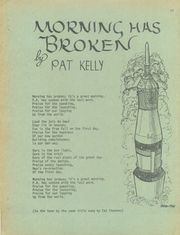 1979 filk, from Masiform D #8, Pat Kelly and MRO Ludwig were the creators

Star Trek fandom and an interest in NASA often go hand in hand.

For years NASA seemed just plain embarrassed by the "Trek connection." The campaign to name the first shuttle the Enterprise was discouraged both openly and covertly by NASA—probably out of fear that spaceflight would lose credibility by being linked to pointed ears. Then at some point—around 1976—it apparently occurred to some quick thinker at NASA that here was a source (and a semi-organized source at that) of visible public support. Jessco von Putkammer began to appear at cons. Names and addresses began to be collected... As time went on, Nichelle Nichols was hired to do for work for NASA. Invitations to join the National Space Institute went to a Trek-list. The opening ceremonies for ST:TMP were sponsored in conjunction with the National Air and Space Museum. Either NASA had decided that the pointy-eared image wouldn't hurt, or that they were stuck with it—I don't know which. But they are, now, trying to reach, and some of us are trying to help. [1]

Fanzines often had a "NASA Update" and columns and announcements about what was new in space exploration. Some zines had a regular column about telescopes and planetariums. Fans wrote reports about the first space shuttles, and they actively campaigned to get NASA to name the first space shuttle, Enterprise. Conventions also often had programming related to space exploration. One example was at the 1976 con Space-Con:

...there were a great number of space and NASA scientists — Gerald A. Soffen, Project Scientist of NASA's Viking Project; Jesco Von Puttkamer, Senior Staff Specialist in the Advanced Program Office of Space Flight; Dr. Kerry Mark Joels, with NASA/Ames Research Center; Andrew Fraknoi, an instructor of astronomy and physics at Canada College, Redwood City, CA, who spoke on "Can the Enterprise fly?;" not to mention Col. Alfred Worden, astronaut, Commander of Apollo XV. I was very pleased to see the interest and respect all of these men were accorded by the ST fen attending the con. Great interest was shown in what they had to say, belying the thought that Trekfen are only interested in Trekkie ideas![2]

We have been getting quite a bit of spinoff from the space program at our meetings lately. I have found it quite an eye-opener. I had no idea how many things we see and use each day came from the Space Program. I could have named Teflon, and electronic watches, and pocket calculators... but those are the easy ones... If we want reality to become a bit more like Star Trek, the Space Program needs our support. Part of that support is to be aware of what the program has done, is doing, will do, and could do to improve daily life for all of us—and to spread the word. Let's Be Aware! [3]

HELP SUPPORT OUR SPACE PROGRAM — If you are in favor of upgrading and improving our space program & wish information on how to initiate programs and actions in your area to achieve these goals, write to: World Space Federation/PO Box 293/Grandview, MO 64030— SASE requested. The world Space Federation is a nonprofit organization of volunteers based in Kansas City who are setting up a central communications committee to coordinate the members of the Star Trek fan network, science fiction fans, futurist and space oriented societies, educators, astronomers, & all other groups & individuals working on the common goal of improving our space program for the benefit of all humankind.

Not all fans were enthusiastic with the NASA/Trek connection. A fan, unhappy about the naming of the first space shuttle writes:

I'm forced to wonder just how civilian NASA is anyway? Do we (Trekfandom) want to be closely identified with a quasi-military organization? [4]

The Influence of Star Trek on Scientists