Star Trek Fans for Peace (STFFP) was a group founded by two Star Trek fans. Its goal was to work towards nuclear disarmament.

The group published at least two newsletters, the second of which was published within the pages of SocioTrek #2. 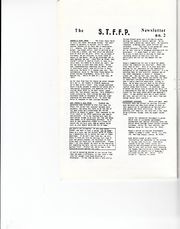 page one of the second newsletter, 1987, click to read

On March 1, 1986. five thousand people will begin a special trek: They will march across the country, from Los Angeles to New York to Washington. D.C., to proclaim a basic truth about nuclear war: "Getting rid of the missiles Is not impossible. Living with them is." Like the raised voices that ended the Vietnam War, that kept Star Trek on the air In 1968 and 1969, this united effort can not only help us reclaim our future. The Pro-Peace Great Peace March will bring us one step closer to the surety that we can have our chance to "explore strange new worlds, to seek out new life and new civilizations, to boldly go where no man has gone before." 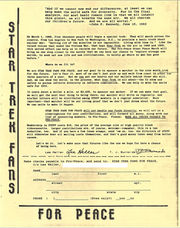 Where do we fit In?

We are STAR TREK FANS FOR PEACE, and our goal Is to sponsor a marcher In the nine month trek for the future. Let's face it, most of us can't just pick up and walk from coast to coast for three quarters of a year. But we can put our hearts and our wallets behind those who will. And, we can show the world, in the process, what Star Trek is all about — the freedom and safety to pursue infinite diversity in infinite combination. We can help to make the world safe for IDIC.

It costs about a dollar a mile, or $3,235, to sponsor one walker. If we can make that goal, we will get the next best thing to being there; our marcher will write us regularly, and his/her letters will be distributed among STFFP members In a regular newsletter. More important — that marcher will be our living proof that we don't just dream about the future. We can unite to make It happen.

STAR TREK FANS FOR PEACE will not handle any funds directly: we will act as a clearinghouse for your contributions, and will forward all money, along with our list of sponsoring members, to Pro-Peace. Please: MAKE ALL CHECKS PAYABLE TO PRO-PEACE.

Membership In STFFP costs $10, the price of the average zine or a high quality blank videocassette. Larger contributions are, of course, welcome —remember, this is a tax deduction, too. And if you have a few loose stamps, send 'em on, too; the directors of STFFP will otherwise bear all mailing costs themselves, and that's good money taken away from better causes.

Let's do it. Let's make sure that futures like the one we hope for have a chance of being born.

This Campaign Was Not a Success, But Had Nimoy's Support

As a veteran of civil rights and anti-war marches of the '60s and '70s, it seemed a natural progression to support with funds and words the Pro-Peace March for nucleat disarmament which got started in March. I was especially pleased to learn, via flyer, that a new group. Star Trek Fans For Peace, was raising money to sponsor a ST marcher on the nine-month trek. Apparently, very few other ST fans shared my enthusiasm, be cause, as I learned later, fewer than one in thirty fans sent a contribution.

Although the Pro-Peace march went bankrupt, the organizers of STFFP, Lee Heller (TWO DIMENSIONAL THINKING) and T.J. Burnside (FESARIUS) hope to keep the cause alive, taking it in a variety of new directions. If fandom thinks multilateral nuclear disarmament is a first step toward the kind of future we want, we have to make the effort. In real life, neither the cavalry nor James Kirk is going to come over the hill in the nick of time. [1]

Thank you for your letter regarding nuclear disarmament and the Pro-Peace Great Peace March.

I'm very pleased to know that you are supportive of the Pro- Peace March. I believe it will be a vital and meaningful way to make a dramatic statement about the need for nuclear disarmament.

Thank you for letting me add my support to all STAR TREK FANS FOR PEACE.

Keep up the good work!

At least one fan, while having no argument with the goal, did not support this effort:

Today I received yet another flyer asking for a donation to ST Fans for Peace and wish to protest, on behalf of myself and however few others share my sentiments, the apparent assumption that no one can respond to the ideals of ST without also supporting this project. evaluate. The notion that all ST fans 'ought" to offer support just because some have elected to associate ST with this march reveals incomprehension of IDIC, and the implication that fans as a group are more enlightened, unified, or pacific than the rest of the population encourages an 'Us-and-them" mentality that is contrary to the purpose of any peace movement. First, I resent all of the 'Unsolicited solicitations" I've received since beginning to buy zines. If I haven't sent someone an inquiry or prior order, my privacy is invaded by such mailings, and I only wish I knew where certain parties obtained my address. Second, since free ads are available in UT, repeated requests from STFFP seem coercive attempts to nag people into contributing to something they've already had opportunity to Third, I'm all for promoting global peace through education, mediation, interaction, and example, but fail to see any substance behind the vaunted symbolism the march supposedly represents. So, a crowd gathers beneath a flag; what practical effect will this have? Will it alter the basic duality of human nature? Every person/state exhibits creative and destructive behaviors. Leaders have always possessed the power to massacre, and whether a hundred or a billion die, is there a qualitative difference in the consequent agony endured by individuals? Did I have at my disposal all the thousands of dollars and man-hours, plus the admitted enthusiasm, that STFFP hopes to generate, I'd think it better spent to establish more open commerce and communication among nations, interdependence being the best deterrent to warfare. [2]