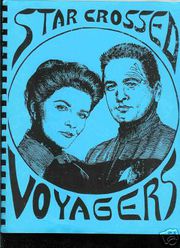 Star Crossed Voyagers is a het Janeway/Chakotay anthology of fiction and poetry by Betty Dain and Karen Morrison. The editor is Pat Hayden.

The zine contains no interior illustrations.

The title comes from a 1994 song written by Elton John and Tim Rice: "When the heart of this star-crossed voyage beats in time to yours. Can you feel the love tonight?"

Summary from the publisher: "Five more tales of love and lust featuring Captain Janeway and her Maquis first officer."

Star Crossed Voyagers Special Edition 1 is subtitled, "Raped." It contains 72 pages. By Betty Dain with poetry from Karen Morrison. Cover artwork by Christine Myers. Graphics by Pat Hayden. Summary from the publisher: "Commander Chakotay struggles to come to terms with his feelings of violation, and rape, after he learns that Seska has taken his DNA to make a baby, and Captain Janeway will do whatever she can to help." 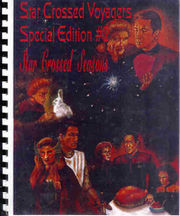 Star Crossed Voyagers Special Edition 2 is subtitled, "Star-Crossed Seasons." It was published in 1997 and contains 82 pages. Summary from the publisher:: "Getting into a year of seasonal celebrations with Voyager's Captain and First Officer. Stories show us how the pair spends Valentine's Day, St. Patrick's Day, Easter, July 4 and Halloween." The fiction is by Betty Dain. Poetry by C.D. Resnick and Heather Schmitt. Color cover artwork by Sophia Kelly Shultz. Graphics by R.R. Schmitt. 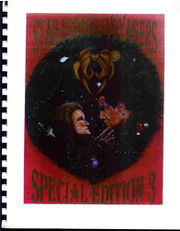 Star Crossed Voyagers Special Edition 3 is subtitled, "The Twelve Days of Coffee." It was published in 1998 and contains 121 pages and fiction by Betty Dain. Color cover artwork by Sophia Kelly Schultz. Graphics by R.R. Schmitt. Summary from the publisher: "Join Janeway and Chakotay as they celebrate the twelve days of Christmas in their own unique and...sensual ways."

Star-Crossed Voyagers was the first print Voyager romance I encountered, so I was glad to find it, though it can't beat the quality of similar material on the net. The entire first issue and most of the subsequent stories and poems are about Janeway and Chakotay, though the editor clearly has a penchant for the first officer and has featured him paired with virtually every woman in the Voyager universe. There are five volumes at present, plus a special issue about naughty Seska and nice Kathryn during the events surrounding the episode "Maneuvers." Illustrations are minimal. The stories are erotic, yet they come across as innocent, even naïve. This is romance novel sex--hardly pornographic, rarely realistic. Everyone talks huskily, everything is by turns firm and melting, nobody ever has to take a bathroom break...well, that's standard for Star Trek. I'm sure that people of the future will have better stamina than we do, yet the number of times the lovers simultaneously explode in a shower of sparks is truly incredible. The language of love is full of mixed metaphors, clichés, and occasional naughtiness--reader beware, if you can't deal with hearing about Kathryn's pleasure button and Chakotay's impressive maleness, or if you can't stomach Captain Janeway screaming the "f" word in the throes of passion. The best parts are not the sex, but the exposition. Chakotay's been given substantive backstory, and Janeway does a better job coping with her conflicting career interests and her feelings for Mark than she ever did on the series. I like seeing her passionate and powerful all at once; even in the most treacly stories, where she calls Chakotay "dearest" and says she loves him three times on one page, there's no contradiction between captain and woman as there is on the show. It's not easy for me to picture Janeway in seafoam-green panties, nor to imagine Chakotay weeping at the scent of her orange-blossom shampoo, but maybe I'm just unromantic. The zines are almost as cheap as Trek books, better edited, and frequently more interesting...so, despite their shortcomings as erotica, I'm inclined to recommend them, if you go for this sort of thing. [1]