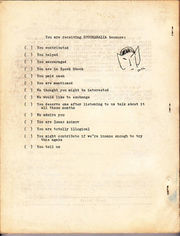 Spock Shock is a term that describes a fan's infatuation with the Star Trek: The Original Series character Spock.

It was first used in print in 1967 in the zine Spockanalia where it was part of its You are Receiving this Zine Because section as well as the name of the included short convention skit by Sherna Comerford, one that was later performed at the very first Star Trek convention, Star Trek Con in March 1969.

[1975]: From a fan: "I can well understand personality rifts or gaps between people with different interests in ST fandom. People suffering from terminal Spock Shock aren't going to be interested in technology freaks, perhaps. Someone deeply into the the philosophy and detail of Kraith isn't going to be interested in a lengthy discussion with someone who's most profound statements are, 'I LOVE ST! I LOVE SPOCK'S EARS!!!'" [1]

[1996]: From Joan Verba: "A tradition that Spockanalia carried over from sf fanzines, and which carried over to subsequent Star Trek fanzines, was the check-off list on the last page. The list's introduction stated, "You are receiving Spockanalia because.... A number of possibilities followed. On my issue, the editor checked: "You are in Spock Shock," "We admire you," and "You are totally illogical." [2]

[undated]: From Jacqueline Lichtenberg: "That exposure [of Star Trek Lives!] ignited a fire by bringing together many more creative people -- people in what Spockanalia dubbed "Spock Shock" -- and what we today call Alien Romance -- that stunning realization of the pure sexiness of a non-human." [3]