You may be looking for Lizards in the Grass.

Snake in the Grass is a gen novel in two parts, both issued in April 1993. The two parts may have also been published as a combined issue at one point, as a 1994 Hupe catalog appears to list them as a single 120-page zine. 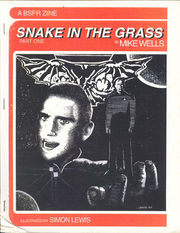 cover of part one 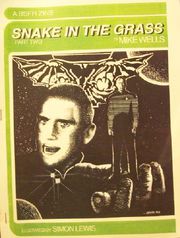 The first volume has 54 pages, the second 58 pages.

Summary from Bill Hupe's catalog: "Investigating the mysterious disappearance of the small science vesse Shatalov, the U.S.S. Enterprise encounters the strange races of the Khatimel and the Yigh. At the same time, the ship is crippled by the actions ofa saboteur, which leaves it open to an attack by the Romulans scheming nearby. Meanwhile other creatures, a dimension apart from our own, are manipulating the situation purely for entertainment, no matter the cost to their 'playthings' —and the cost if other death!"

This TNG tale is published by BSFR in two parts. Written by Mike Weils, it has the usual high quality printing and glossy covers which are BSFR's hallmark (although I was surprised that the editor missed a couple of recurrent spelling mistakes). It contains full page illustrations by Simon Lewis of each of the main characters. The story is set in the third season - after Pulaski, but before Wesley has left.

This is a BIG story! It begins with the Enterprise being assigned to investigate the disappearance of a small science vessel, and goes on to include Klingons, Romulans, two new races which exist in different dimensions, sabotage, spies and war!

What it does not include, in my opinion, is believable characterisation. Often I felt the characters were just standing around delivering lines (at times even cliches) appropriate to their function- I found it hard to be particularly unsympathetic - losing his temper with subordinates; inviting all senior officers to take a break from bridge duty because it was boring, saying, "I can call up a couple of reliefs quite easily if I need them"; and even leaving Data and Wesley alone on the bridge while he goes off to do his packing when the ship is in an absolutely critical situation with systems tailing all over the place.

However, after a somewhat shaky start I found the characterisation of Data to be the best and the two scenes I liked best involved him - one of him talking about "Expecting the unexpected" and the other in the situation I mentioned above, where his skills get tested to the utmost as he single-handedly holds the ships computers together to allow crewmembers to be evacuated

So, to summarise, this story contains lots of action and adventure and some technobabble (or maybe it's real science; I didn't understand it!) which, at the risk of being thought sexist, I think might possibly appeal more to male readers. [1]