Lizards in the Grass

You may be looking for Snake in the Grass.

Lizards in the Grass is a gen 145-page Forever Knight novel by Karen Miller. The editor is Mary GT Webber. 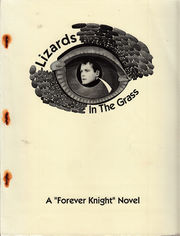 front cover, the back cover is blank, artist is Karyn Bradford

It was published in Australia and won a FanQ.

The first edition was published in January 1995 and the second edition a few months later in March 1995 to deal with formatting errors and "inaccuracies born of not seeing Hunters or Dead Issue."

From the editor: "This zine was originally produced on an Amstrad PCW 9512, translated to Word 5.1 and DTP'ed on Macintosh Powerbook 170. Typeface is Geneva 10pt. Cover created on CorelDraw 4.0 and Pagemaker 5.9 using a flatbed scanner."

"Dedicated to all those who pursue the life creative."

The title of zine comes from a poem by John Skelton (1502) that ends with "That when you think all danger for to pass, Ware of the lizard lithe lurking in the grass."

When Schanke is seriously wounded in a convenience store robbery, Nick is faced with taking on a new partner. Friendship with Alex Haid, however, is swiftly complicated by the grueling demands of their current case, Natalie's feeling for Alex, Nick's need for secrecy...and Alex himself, who has his own demons to battle. [1]

... the leap from writing light hearted young adult romance novels to full length fantasies is a large one ... and the chasm between them is filled with doubts and fears and refrigerators that really should be cleaned out right now.

Let me share a secret with you: just because you've been published once, or twice, or even thrice, as I have, there is no guarantee that you're going to be published again. And that, I have to tell you, is a really scary thought. Especially when in your heart of hearts you define yourself as a writer.

So in between struggling with the damn fantasy and cleaning out the fridge, I had a look at this show about a vampire working as a homicide cop to make up for all the killing he has done.

Okay. Now for the big confession.

When Mary first told me about this show, I scoffed.

Yes. I did. Mea culpa, mea culpa and so forth.

Mary never could resist a challenge. She showed me a pilot two parter. I thought, well, it's okay. Nothing to write a 75,000 word novel about. I though Schanke was endearing. I thought LaCroix made a neat villain and had, in fact, a perfectly valid point of view. I thought Geraint Wyn Daives overcame being blond very well. And it was great to see Catherine Discher again.

Then Mary showed me "Feeding the Beast."

Holy Haemoglobin, Batman! Where did the hell that come from?

Here was a show full of characters who didn't have their shit together. We were talking -- God forbid -- three dimensional situations without happy endings. We were talking neat philosophical stuff like redemption, and self acceptance. The struggle to be human. Taking what you want, and then paying for it. The nature of love. Betrayal, of oneself and others.

Loneliness, and isolation, and the burden of feeling oneself to be on outsider.