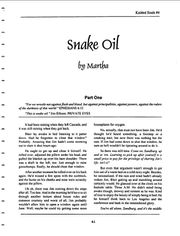 first page of the story from Knitted Souls #4

First posted online in 1997, it was later published in the gen zine Knitted Souls 4 (1998). The story was nominated for a 1999 Huggy for Best Novel, won the 1999 Cascade Award for Best Novel and won the 2000 Cascade Times Awards in the Scary/Horror category.[1]

After Blair finally confronts an old nemesis at an anthropology conference in Los Angeles, he and Jim bring more back to Cascade than just a touch of sunburn.

It is part of the Tristes Tropiques Trilogy:

A comment on the series: "By dint of her considerable talent and technical sophistication, Martha has carved out her own niche in the Sentinel fandom. Specializing in terribly scary, horribly unsettling stories, she forces Blair and Jim through the wringer, taking the reader right along with them.

The Tristes Tropiques trilogy is a truly impressive work, part psychology and part gothic thriller, offering insights and fright in equal measure. Scary, fascinating and a huge amount of fun, I recommend these stories even to those otherwise uninterested in The Sentinel." [2]

In retrospect, I'm sure it was Kris Williams' Test, the very first TS story I ever read. Obviously, it made a huge impression. In all the most important ways, Snake Oil is just a retelling of Kris's story with different room decorations. Jim hurts Blair and doesn't realize he's done it. Blair has to help Jim and protect himself at the same time. That's a *great* beginning for a story. I only wish I could figure out how to tell it again.[3]

Today I am going to recommend a Sentinel story. A *gen* Sentinel story. (All right, those of you who know me, you can stop laughing now.) Snake oil by Martha is a well-written horror story with good characterization. [4]

About this gen Sentinel thing... no, I am not going to apologize for it. Someone has already pointed out in the guest book that Martha's story Plank is well worth reading, and I can only agree. There is also Ordeal by the same writer, and I've already previously recommended Snake oil.[5]

I guess I'm in the minority, but I didn't think the much mentioned "Snake Oil" was all that. [6]

Probably one the best fanfics in any fandom ever written. [8]

This is *the* best Gen Sentinel story, IMHO. I regularly use it to make converts to Senfic. <G>

A word of advice; don't read it on a dark and stormy night or you'll be afraid to go to sleep.

I remember there was mention of a possible TS made-for-tv movie. Too bad Martha isn't a pro, because Snake Oil would make a *kiiler* TS movie. It's loaded with suspense, and while there are no explosions <G> there'd be good location shots, stuff for the stunt men, and the special effects guys could go to town!

Can you tell I've envisioned this story as a movie in my head already? :)

Wow. I sat down and read it at one sitting, and... wow! have to say I'm impressed. Man, those scenes where Jim gets angry with Blair are *scary!*

It's funny, though, I went on to read "Ordeal," also by Martha Taylor, and I found that I liked that one better-- that's just my personal preference, of course. "Ordeal" seemed to deal more with the characters of Jim and Blair, while "Snake Oil" was more about setting a mood. (and what a mood! Brrrrr!) [10]

Snake Oil is excellent, imho, a marvelous horror story. Not opium of the masses merely because it spouts angst and smarm -- the writing is excellent, the plot tight, and overall -- it's downright *spooky*! [11]

Ah, this was very good. Most of the other scary/horror TS stories make it look too easy. This one was more realistic, more subtle (there's that word again - subtle) and more ambiguious, in a sense. It didn't require one to believe in reincarnation, or voodoo, or Wicca, or Shamanism, or even Catholicism - just something Other. It built up well. The author again seems to have a good grasp of academia. Maybe some people might possibly complain that this story was too slow, or something, but, I think it works better that way - the slow creeping wondering if one is just imagining things, if one is going crazy... makes other TS stories I've read (so far) of this kind seem about as clumsy as Stonehenge compared to the Notre Dame. You can't really just cure such problems by by an application of Holy Water. Not that easy. I really liked the way that Blair was grasping for rituals and not finding answers ('cuz I had faith he'd figure something out eventually!). This was definitely good. This story won the 2000 Cascade Times Awards in the Scary/Horror category. This series was nominated in the series category.[12]

I'm breaking my own rules here and rec'ing a story that isn't slash, its gen. But this is one of the scariest stories I've ever read, professional or fan created, and the best story to read on Hallowe'en. The friendship between Jim and Blair comes through strong and professional writers should plot this well. Watch out though, you might be sleeping with the lights on tonight.[13]

I'm not usually a fan of horror or the occult, but for some reason I love it when things that go bump in the night come after our guys. Horror and the supernatural are genres that mix well with The Sentinel. Super senses are made for seeing past the surface and a shaman is tuned into other planes of existence. Even in canon visions, spirit animals, and a ghost make an appearance. Martha is one of the treasures of Sentinel fandom. Here she tells a classic tale starting with the minutiae of normality. When odd things start happening at first Blair thinks it's stress or that he's imagining things. When the horror becomes undeniable can Jim's strength and Blair's faith in his Sentinel save Jim's soul... and Blair's life? [15]

...a good one that made me lose a little sleep the night after I read it.[16]

After a trip to LA, very strange, very dark, and very, *very* creepy things begin happening to Jim and Blair. Snake Oil is, by far, the creepiest fanfic I have ever read. Martha does a brilliant job of building up suspense as she slowly reveals bits and pieces of Jim and Blair's trip to LA and the unexpected consequences of the trip. Her plot unfolds gradually and with an ever-increasing sense of doom and by the time I got to the reveal, my nerves were snapping. A perfect, haunting Halloween treat (that you should most definitely not read with the lights off).[17]

Creepy. as. fuck. I first read this at work, in my office, and I didn't care that it was noon. I shivered.[18]

I want to start out today with a Sentinel story that's perfect for Halloween -- Martha's Snake Oil. Although I read ghost stories, I'm not usually scared by them. "Snake Oil," while not precisely a ghost story, scared the beejesus out of me. Extremely well-written with perfect characterizations, this story is tense, absorbing, and suspensful. Truely, it's one of the best things I've read. It's also extremely long, so make sure you have plenty of time to spare when you start reading it -- because once you pick it up, you won't want to stop until you've finished it.[19]