Ordeal is a Sentinel story by saffronhouse. 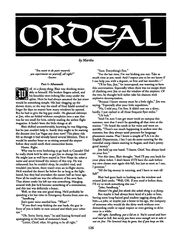 It was published in The Sentry Post #2 and is online.

It is part of the Tristes Tropiques Trilogy:

A comment on the series: "By dint of her considerable talent and technical sophistication, Martha has carved out her own niche in the Sentinel fandom. Specializing in terribly scary, horribly unsettling stories, she forces Blair and Jim through the wringer, taking the reader right along with them.

The Tristes Tropiques trilogy is a truly impressive work, part psychology and part gothic thriller, offering insights and fright in equal measure. Scary, fascinating and a huge amount of fun, I recommend these stories even to those otherwise uninterested in The Sentinel." [1]

About this gen Sentinel thing... no, I am not going to apologize for it. Someone has already pointed out in the guest book that Martha's story Plank is well worth reading, and I can only agree. There is also Ordeal by the same writer, and I've already previously recommended Snake oil.[2]

Martha has an excellent style of writing, and Ordeal is a great example of that story-telling skill. The story itself is told in a shifting time-frame, so the reader has to peel away the actual events. Then it puts each of the guys in the shoes of the other, so to speak, and shows why neither can take the other (or what he can do) for granted. A great role-reversal situation for both! [3]

The opening gets you hooked, wondering what has gone wrong. Then you get initially relieved, realizing that Jim isn't doing this out of sheer spite after all... and you wonder what happened.

Blair finally tried guilt. "And what about my research? Do you think I'll have any hope in hell of finishing my PhD now? Damn you, Jim, we had an agreement. What gives you the right to ruin my career?"

A muscle twitched in his jaw. But Jim only said, "Those extra letters after your name won't mean very much if you're dead."

This was very good. There were some good insights there, a struggle to understand, to communicate. There was... a subtlety about this writing that I enjoyed. I'm not sure how else to put it.

It's like I've already used up all the words in the world, Blair thought. There aren't any left for Jim.

Oh, and I liked the titles of the parts. And Blair's friend Paul's theory about Sentinels was an interesting one (though of course, completely wrong!). Just shows the wide world of academia, don't it? I liked this story!