Small Small World is a J2 AU series of stories written by dragonspell in 2010 as part of the Supernatural Reverse Big Bang Challenge. In a reverse Big Bang challenge, an artist offers up one drawing along with a prompt for the suggested storyline. Writers can then write a story of at least 3,000 words to accompany the art. 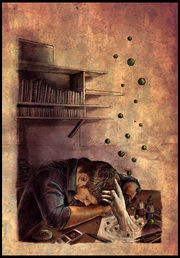 The original art prompt by petite madame. In the drawing the hand of one of Jensen's comic book creations reaches out to touch him.

Small Small World is based on a drawing by petite madame and her following prompt: "Description: Jensen is a successful comic artist. One day, his comic comes to life and the main character, Jared, comes out of the page with all the strange little creatures from the story (think : A-ha's PV for "Take on me") Additional pieces are available and will be sent to the author after the art claim."

After the they began collaborating, additional drawings were created, mushrooming from the initial drawing. Writer dragonspell explains in her author's notes: "When I first got this prompt for the ReverseBB, I was thinking that I could do a dark and moody 'Cool World' thing with it. That was before petite_madame got a hold of me and sent me everything that she had done and, as I flipped through the vast amount of incredible artwork, I realized two very important things: 1. Dark and moody was kind of out (the peas wouldn't let me! ._. ) and 2. there was absolutely no way that I was ever going to be able to live up to the prompt. I certainly tried my best, though, because I really wanted to do this prompt (and PM) proud.... And if you've seen petite_madame's art posts then you know just how big this thing got. It's just hilarious because this fic is based on a comic book artist who's creations come to life and here it is ending up with quite a bit of it illustrated. It's almost no longer a fic but instead more a graphic novel!"[1]

Art has been included with the artist's permission.