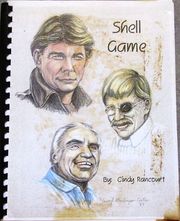 Shell Game is a gen 204-page Airwolf novel by Cindy Rancourt. The cover is by Cheryl Meidinger-Carter, and the interior art is by TACS.

It is a sequel to To Soar Like a Hawke.

Summary from a distributor, Agent With Style: "Cindy Rancourt continues to join the forces of the Firm and the Company, even though some tempers are explosive, on a rescue mission with Airwolf. Could Dom still be alive, even though String saw him die in an explosion? Read this and see!"

From a distributor, Bill Hupe: "Strong and St. John, along with the rest of the Airwolf crew, must rescue Archangel... and Santini."