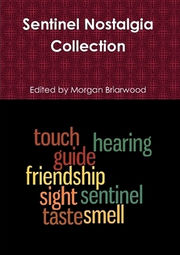 It is a print version of eight Sentinel Big Bang stories that were previously posted online.

"The Sentinel Nostalgia Collection was created by the members of the Sentinel Big Bang community to celebrate the 20th annniversary [sic] of TS."

The book contains selections from all eight of the Nostalgia Big Bang projects. It’s print-on-demand, which means that the cost is based on how many pages are in the book, and it’s priced differently depending on where you are and what currency you’re using. It’s over 600 pages (!) which means it’s a tad pricey, but I’ve kept the cost as low as I possibly could without making the print so small you need sentinel vision to read it!

Please note you can’t find the book by searching the Lulu website, only via the link above.

I’m sorry to be later than I promised with this: The reason it’s taken so long is I had to wait for my review copy to arrive so I could make sure the artworks looked right. You can judge how words will look from the online preview, but the only way to be sure about the art was to see the real thing. I guess the holiday weekend slowed the order down a bit, too. But I’ve got it, it looks fab, and we’re good to go!

A couple of other things: Lulu do bulk discounts (how many you have to order to qualify varies), so if you live near other fans who want copies you might be able to save a wee bit by co-ordinating an order between yourselves. The book will be available only until the end of this year, so don’t wait too long. And lastly, if there’s a Moonridge Auction this summer (we’re still waiting on confirmation), I will donate a couple of copies on behalf of the Big Bang community. [1]