Secret Admirer is a K/S story by Ciana Sepulveda. 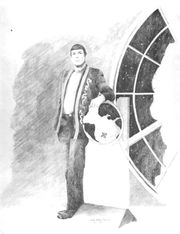 Anne Marie Smith for "Secret Admirer " -- "What a fascinating, gorgeous Spock. First, it's a unique setting, and very nicely done—the observation window and the globe of Earth that Spock is leaning on; and a good balance with empty space. His clothes are absolutely great—just the sort of thing such a Vulcan gentleman in the know would wear—everyday elegance, understated. That's our Mr. Spock. This is a very unusual Spock but it doesn't feel out of character to me. The relaxed stance is what's so unusual, and it's just beautiful- It makes me think he's been learning some new body language from spending time in bed with Kirk. I also like his slight paunch—maybe he's been learning about eating for pleasure too." [1] 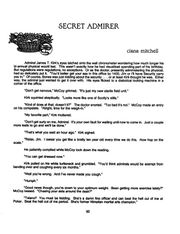 I am absolutely in love with this author's Kirk and Spock. There are very few among us who can write our characters with this much depth, who can bring them so clearly and vividly to mind with just a spoken phrase or two. I never have to read a 'Kirk said" or a "Spock replied" to know which one is speaking. They are just so "there" in both speech and mannerisms.

Although this period of their lives, the long winter of their discontent between ST I and II is not my very favorite time in their lives, Ciana weaves such a magical, intriguing tale that I was immediately captured. The pace of this story is exactly right, the tension building from the very first moment Kirk receives a seemingly innocent bottle of champagne at a quiet dinner with McCoy and never lets up until the final scene. Intermixed are beautiful scenes of Spock and Kirk easing into a sexual relationship based upon years of friendship and the deep, sweet feelings each has for the other. Nothing is forced or out of character. These men have moved into a more mature phase of their lives where such a relationship is possible for them.

Ciana so masterfully laid down her trail of red herrings for the reader to follow that I enjoyed being led where she wanted me to go, and she did it so delicately and with such style that I hardly felt led at all.

I also like the use made of McCoy, especially the delicious scene between the doctor and Kirk that opens the story as the admiral undergoes his routine physical. The dialog sparkles with warmth as these two friends banter and tease each other. It sounds real. It feels real. As does the beautiful symbolism of the antique sextant Spock gives Kirk as a birthday present, and with the gift of his love provides the rudderless Kirk with a way to get back on course.

I remain in awe of this author's ability and eagerly look forward to her next story. Please. Ciana, don't ever stop writing K/S. [2]

This story is set in a time period I usually don't care for; Kirk is Earthside, an Admiral, and Spock is teaching at StarFleet Academy. But it works, here. At the beginning of the story the two are close friends but not lovers. Both desire the other but do not know their desire is reciprocated. At one point Spock gives Jim a birthday gift which touches him very deeply—it is an authentic antique sextant, still fully functional and in mint condition. Kirk demurs but is eventually convinced to accept it despite its cost. And he is delighted.

Kirk begins to receive a series of notes and gifts from an anonymous self proclaimed "secret admirer". The person claims to love him deeply and only to want his happiness—but even so, Kirk, and McCoy, both find it a little creepy. McCoy is more alarmed than Jim, because he is aware of the history of celebrities being stalked and injured by obsessed admirers. Jim just thinks it's silly, and more than a little embarrassing. And of course he's fixated on Spock and not in the least interested in anyone else. As the story progresses the notes get more intimate and possessive in tone. Even Jim is a little alarmed now and Spock is more than a little annoyed, though of course he does not admit it. One evening they come back to Jim's place after taking a walk, to find that someone has been inside and has left flowers and a note. Spock reflects uneasily on the fact that unlike McCoy's apartment building, Jim's is relatively insecure. He tries to trace the note back through the email system but finds it was sent from an anonymous public com terminal somewhere nearby. Jim ignores the flowers and spends the next several hours just talking with Spock, enjoying his company. A day or two later, he comes home from work one day to find a package outside his door. It contains a paper copy of "Mr. Midshipman Hornblower", and there is another email waiting for him to the effect that his admirer has discovered Kirk likes old books and Hornblower in particular. Kirk muses about this but realizes the person might have got it from any one of the interviews he's done since returning to Earth. In any case he already has a copy he treasures, because Spock gave it to him. He decides to donate this one to the library and goes over to look at his sextant and enjoy it all over again. When he treats Spock to dinner a night or two later he tells him about this and they puzzle over it but get nowhere. Again they have a pleasant evening together, though after Spock leaves Kirk is mad at himself for not saying what he really wants to. Finally, after they leave a party for a retiring Admiral one night, Spock and Kirk tell each other how they feel. It is late, and they are at Jim's apartment again. Kirk speaks first and then stops, nervous—and Spock comes up behind him and touches his lips to the back of Jim's head. He tells Jim that he too has felt this way, that he feels no shame but joy, that he is grateful that Jim spoke first and thereby gave him the courage to do likewise. They embrace, and begin to kiss and to explore one another. After some time spent learning and sharing their pleasure, they make love, and it is good, for both of them. They lie quietly for a while till desire returns, and again make love. When they awake together the next morning both are struck by how right it seems to be doing so. Neither is embarrassed or awkward and I for one appreciate this; I find icky-cutesy morning-after scenes an enormous turn-off. The story is a long one; there is much time of Jim and Spock's growing love and enjoyment of one another, and a slowly escalating series of notes and gifts from the mysterious admirer. More than once Jim's apartment is broken into. Finally the admirer actually calls one day, using a voice changer to disguise the voice. Demands Jim love them and not "that Vulcan". Wants to see him, but plays coy, will not commit to where or when. Spock tries to analyze this the next day but can only determine it is a male voice. He warns Jim to be careful and hangs up. Another call comes in, the admirer again. Same sequence, cagey and sly. Spock is very uneasy but Jim still refuses outside help. It is pride, he wants to solve this himself. But he nearly gets himself killed by doing so. He goes to meet this person, alone, and if Spock did not track him and show up, he would have died. Spock stuns the stalker and Security tows him away. It is some person that neither man has ever seen before, who has no criminal record, and is a coms expert. StarFleet Security reams Kirk but good and even Jim has to admit he deserved it. But as they walk away after being lectured, both know that it is Jim's nature, that it's just part of who and what he is. He enjoys Spock's description of how he intends to punish him—but both know he'll never change. It doesn't matter. They are together. I hope I haven't made a dreadful hash of this. My brain's a bit fried. But it's a great story; there's also a scrumptious picture by Anne-Marie Smith of Spock in going out to dinner type clothes, lean and luscious, mm yes very nice. Haven't seen this artist before but mm, tasty indeed.

So. Read this. You'll be glad you did. Good stuff all round, despite this reviewer's theoretical shortcomings. Enjoy. [3]

This is a very enjoyable story about the relationship between Kirk and Spock, and how it develops and deepens once they express their love for each other. It’s set against the backdrop of a plot about an unwelcome anonymous secret admirer bothering Kirk, and time wise is about half way between TMP and STII.

The story opens with McCoy having to drag Kirk in for his physical, which is scheduled on his 44th birthday. Spock has just brought the Enterprise back from a 3 week training mission, and Kirk is very much looking forward to seeing him again. The story is told from Kirk‘s POV, and we follow Kirk for a few days as he visits with Spock, goes to work, talks with McCoy, etc. The look at Kirk’s daily routine is well written and interesting, and he thinks a lot about how much he enjoys being with Spock once again. There are some nice scenes between Kirk and Spock that are very intimate, and really show how close the two have grown. I like the scenes where they celebrate Kirk’s birthday, and Spock’s gift of a sextant for Kirk, especially this part: But the human’s eyes were directed to the sextant on the bookcase, an expression of contentment on his face. “I still can’t believe it’s mine. Spock, you shouldn’t have gone to so much trouble.” Spock rose, took the tray from his hands and set it down. “It was no trouble at all.” “Still, it’s a lot of credits to spend.” “I put no price on our friendship, Jim. You are worth a thousand times more to me than any gift I can give.”

“Spock”, Kirk whispered, deeply touched. Words, so many words flooded Kirk’s mind. He found he couldn’t wrap his tongue around the right ones. Kirk’s realization of how much he missed the Vulcan and how much Spock means to him brings him to finally tell Spock how he really feels about him (after a few missed opportunities, and long meaningful looks exchanged with Spock). Kirk learns his feelings are reciprocated, and one of many beautifully written scenes is the love scene between Kirk and Spock that follows, which is romantic and erotic. I don’t think the secret admirer plot is nearly as interesting as the development of the relationship between Kirk and Spock. In order to make this plot more interesting, I think the story would have had to be longer and the character of the secret admirer developed more. As it is, he’s merely an unknown admirer who stalks Kirk, and we know nothing of his reasons or motivations. Also, the end of this plot line seems rushed, and I can’t believe Kirk would act so foolishly as he did in the confrontation with his stalker.

Despite the increasing danger to Kirk from his deranged admirer, the story has a cozy feel to me, thanks to the warm and loving portrayal of Kirk and Spock’s relationship, which is the real strength of this story. Plus, Ciana had a way with words, and what might sound mundane from my description in this LOC is anything but in her talented hands. [4]