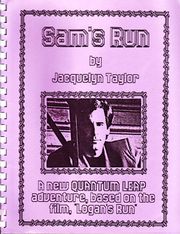 Sam's Run is a gen crossover 54-page novel by Jacquelyn Taylor. The only pictures are the front and back covers and one drawing of The City at the very end of the zine.

From the zine ad in the back of Quantum Quarterly #9: "Sam becomes Sandman. Based on the movie Logan's Run."

The inside front cover reads: "Life in The City is perfect: Whatever you desire is yours for the taking. But you better enjoy it while you can, because once you turn 30, it's all over. Dr. Sam Beckett is accustomed to "fate" hurling him through time to correct historical mistakes, now join him on the adventure of his life when he leaps into the future to save humankind! Based on the film, "Logan's Run"."

From the first page: "First Hour. He felt the gun in his hand. As the blue glaze faded about him, the gun was in his hand, finger on the trigger, pressing in on the trigger and his brain caught up and Sam though - No!, jerking his wrist aside. Green flame starred from the muzzle. He tracked its invisible line of travel to the side of a wall several yards away, next to the woman's head. He gasped as the fire took root on non-living wall as if it were some exotic new plant life..."

Yes, that's 0 stars. Don't bother unless you're an absolute completest. Sending Sam as far into the future as Logan's Run is set just doesn't work at all for me. [1]