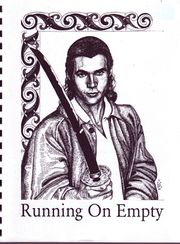 Running on Empty is a 90-page het novel by Debi Moseley. Cover by Sophia Kelly Shultz. Graphics by R.R. & Heather Schmitt. It has a sequel, Highland Dreaming.

The stories in it were previously on the Internet.

It required an age statement to order.

Summary from the publisher, "When Duncan MacLeod helps an old friend deal with an even older enemy, the aftershocks bring surprises to both of them...it seems that not every Immortal Duncan MacLeod meets is after his head...some are more interested in other parts of his body."