The Roy Dotrice Reunion was a series of fan-gatherings in the UK.

They were sponsored by Helper's Network (UK) chair, Gwen Lord for members of The Roy Dotrice Fan Association.

Roy Dotrice, who portrayed Jacob Wells (Father) on Beauty and the Beast (TV) was the guest of honor.

The gatherings were small. One was held at a fan's home.

Dotrice was very active guest. He shared meals with fans, played their games, created and directed his own games, kissed their babies and dogs, read their fanworks aloud, and was described as the life of the party.

It may have been fans getting together with each other to watch Dotrice in a play. Because it was so small and local, it might not have been considered "official" in the way the cons are numbered. 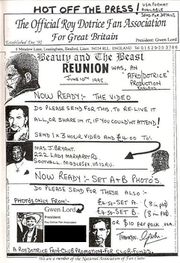 Gwen's reunion went very well, others will no doubt write their opinions, but for me, the day was truly great. We had good conversations, a lovely tasty buffet, the food was superb. Roy was in great form, especially reading to us Glenys Walker's letter to Vincent from Father on parenthood, I laughed til the tears came. Roy is so wonderful no one not knowing him would know he is a Shakespearean actor, he really lets his hair down in gatherings. And he lovingly enraptures us as he reacts the naming ceremony from God Bless the Child for us, to Matisse and Jeremy's little baby Catherine. The weather wasn't up to much but we did have about one hour of sun later in the afternoon. But it did not deter us from having a great time. Ruth brought video tapes of Linda of course it was marvellous and great entertainment. Roy showed his love for dogs making a fuss over Oscar a very large canine. My special thanks to the dealers for bravely standing in the cold outside, I hope they are none the worse for it. I would also like to say to Roy, thank you so much for coming and making it all so special. Also to Gwen for the organising,and Jeremy and Matisse for allowing us to spend some time in their lovely home. And thanks must go to Malcolm who was so patient

following us around providing the material for the Videos you can now buy. [1]

I would like to have been able to say that the morning of the Reunion dawned bright and clear, giving promise of a beautiful day. Alas, it did no such thing. But that ^d not prevent an assortment of people converging on Whetstone in anticipation of an enjoyable Convention, jointly presented by Afro Productions and the Roy Dotrice Fan Association The Convention was opened by Gwen Lord, President of the Fan Club who in spite of being up at the crack of dawn, and working hard since 8.am setting up dealers tables etc, was her usual collected self. She thanked all those present for coming to the Convention, especially those who had travelled a long way just to be there. She also thanked Jeremy and Matisse Charles for opening their home as a venue, and presented them with the gift of a Georgian silver tureen as an expression of om appreciation.

The dealers tables being declared open, she hoped that there would be a brisk trade since all the goods on sale had been made very lovingly. One of the dealer's tables was run by [Monica P], and her family, on behalf of Hearing Dogs for the Deaf. I hope she had a good day.

Gwen also stressed the need for small children to be closely supervised - we did not want anything to happen to any of Matisse's lovely ornaments, or indeed her furnishings. Trading at the dealer's tables continued well until about ll-30am when Roy arrived, having been collected from London by Jeremy.

He greeted everyone there individually, and was then taken by Gwen into a private room and reappeared wearing a magnificent waistcoat. This was a birthday present to Roy, brought forward from 26th May. This waistcoat, made in black velvet with gold thread, and silk lining, had been made by Gwen herself - revealing yet another talent possessed by Our President. At 12.00 noon the food was served. It was very good and there was indeed plenty of it, so that when the writer arrived at 1-30 there was still plenty to tuck into.

At this point I must introduce Chatterbox to Oscar and Vincent, Kojak and Thumper (dogs).

At 1.30 pm came the Naming Ceremony, when Roy spoke the lines from " God Bless the Child" over Matisse & Jeremy's second little girl, now aged 5 months, and named her Catherine. We all sat on die floor "Tunnel Fashion" whilst Roy read two of the " Letters to Vincent" by Glenys Walker. These are the letters of advice to a new father, designed to prepare him for the "joys" of sleepless nights and other trials ahead and I expect already well known to our readers.

And, as advance publicity, there will also be on sale shortly a new novel by Glenys Walker entitled "To Search No More", and I'm told it is well worth catching. Glenys is one of a group of talented and dedicated fans from Down Under. Amber organised a game "Who am I" which was greatly enjoyed, but also greatly puzzled many. Roy organised two other games, a team game in which Roy gave the title of a film to the team captain and then it had to be drawn on a sheet of paper and guessed. There were 25 titles in all, and our team (Sylvia's) for one could have done with a good artist, not to say a good cartoonist, on it. We did not win. The other game was a memory game - remember and itemise the number of items on a tray, after looking at it for 3 minutes. Not so easy!!

There were two raffles; an ordinary one with lots of prizes and a special one of a Pam Tuck Vincent, donated by Avril, and won by Joyce Clarke. Congratulations, Joyce. An auction followed of a beautiful engraved glass goblet, engraved by Andy Armitage, Jacqui Clarke's fiance, and bought for £35 by Jacqui Thornton.

Roy left at 4.15pm again ferried by Jeremy, but before he left he gave a speech of thanks to Gwen, Matisse and Jeremy, and

everyone else who had worked so hard to make the day a success. He also said he was sorry the weather had not been kind, since he had been looking forward to seeing Ruth in the swimming pool, and Gwen in a bikini! Next time, Roy! [2]

Billed as the "second" one.

Billed as the "third" one. See flyer here.