You may be looking for the Sentinel story by Laura Jacquez Valentine called Rough Trade.

Rough Trade is a 203-page slash Sentinel novel by Kathleen. It has a cover by TACS. The author warns that it contains non-consensual sex. There is also a small short story by Kathleen following the novel called "Shock Waves" that comprises 20 pages of this zine. 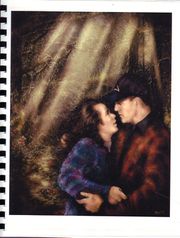 It was first published by AMC Press in 1999. In 2018, it was reissued in print and PDF by Requiem Publications.

"Blair's eyes widened in shock; a strange, lethargic numbness froze him in place. He was still asleep, right? This was just a nightmare. And nightmares weren't real - just a trick of the mind. It wasn't happening. But it was ... Lee Brackett was planning to sell Jim on the open market - to the Chinese, the Russians, the Feds - it didn't make any difference. Brackett kept no loyalties other than to himself. This whole ordeal had been set up to show Jim off, to demonstrate a Sentinel's abilities. And use his Guide as bait for the trap."

Well, now that you finished the novel (and are probably shivering over the final and justified judgement of Lee Brackett), The author decided to put another story of hers from the same universe here to calm you down (or heat you up, depending on how you look at it...=-])

This story appeared on the net but has been revised by the author to put in this zine and has only been added as a little bonus to have the reader end up wrapped in a warm and fuzzy mood along with Jim and Blair...

**Not Recommended** This story had such dizzying changes in time, place and setting, I had a hard time following just *what* was happening *when*. It swept from the present to different moments in the past with almost no warning, which I found frustrating. A good 'Lee Brackett is a Sentinel and captures Blair to be his Guide' story, though, with some amazing drawings by the ever-talented TACS.) [1]

It has been awhile since I read this 'zine so I'll forego any reviews at this time. I do remember it was a satisfying story. No surprise ending. :-) TACS has done her usual wonderful art work. [2]

"Rough Trade" by Kathleen: I don't recall reading any TS stories by this author prior to this, but I would certainly read anything else of hers I could find now. (She has produced anime fanzines, under a different name). A Brackett-is-a-Sentinel-and-kidnaps-Blair scenario. We've seen it before, but this is a suspenseful re-telling of this standard fan plot. If you harbor any soft spots for Brackett, as some fans do, this is not the zine for you. She presents him as a three-dimensional character, but a nice guy he ain't. Jim and Blair are strong in themselves and strong in their bond. Excellent job on the character "voices." I can *hear* the characters saying these lines. The one major problem I had with this zine was the way the author juxtaposed it with a flashback story: the time line jumped around in a rather confusing way -- flashbacks within flashbacks. I assume this was done deliberately, as a matter of story telling style, but I felt that it made the story harder to stay connected with at times. If I were the editor I would have suggested a re-write. But even with that difficulty, it's a pretty satisfying read.[3]