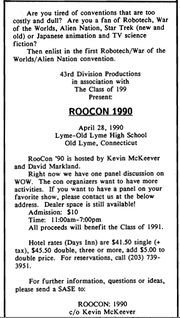 flyer printed in The Blackwood Project #6

RooCon was planned as a fan-run convention at a high school. Admission was $10.

The Organizer Describes the Event in Advance

"Are you tired of conventions that are too costly and dull. Are you a fan of Robotech, War of the Worlds, Alien Nation, Star Trek (new and old), Japanese animation and TV science fiction? Then enlist in the first Robotech/War of the Worlds/Alien Nation convention." [1]

"We do have two confirmed guest speakers (Hooray!) They are Elyse Dickenson of TBP. (Elyse and I will conduct a fan panel discussion on WOW:TSI and first season.) (How'd I let myself get talked in this?) We also have Will Murry of Starlog and author of the Destroyer novels. RooCon '90 has received support from Industrial Light and Magic, Warner Brothers, Universal Studios, Eternity Comics and Palladium Books. RooCon will have slide shows, media updates, panel discussions on favorite SF shows. We'll also have free gifts, raffles, and special events. In all, RooCon '90 is becoming equal in comparison to other national SF cons. Dealer spaces are filling up fast due to the low rates and originality of a high school event... Also, even if you can't make it to RooCon, there will be a video called "RooCon '90: The Quick and the Power Hungry" available. There is no price set for it as of this writing. But send me a letter (or a SASE, I'm dying to see what one looks like!) or call me for the info... RooCon now has the support from Paramount! They've given me slides on the second season of WOW. In addition to our panel discussion, we'll now also have a slide show..." [2]

Con Report from the Organizer

The convention itself was well done. It went off flawlessly, no problems, everything went according to plan: except we only had 13 people. However, we still made $500 [mostly from the auction] for my class. And out of those 13, only two members from my class showed up. But $500 out of 13 people was great. It was the most profitable fundraiser in Old Lyme history. But sometimes that won't sit well with students here. April 30th, Monday morning. Time to face the music and the overture as I walked in was very hostile. For the whole day I was asked "How did it do?" and when I gave them my answer the reaction was "Oh, it flopped" or "Oh, great, you ruined our Junior Prom. It's all your fault!" That was pretty much the prevailing mood. However, RooCon generated enough funds to cover prom costs, yet many of my classmates felt it still failed them — while they were suntanning their bodies on that warm April day. I hope they received a good tan. So I was able to bring the convention in on time, on budget, and make $500 off low attendance that would kill any other fundraiser. My class started with $1,2000 [sic?] and it ended with $1,200. Some still call it failure yet in my opinion it is a true form of success. Now the great question arises, "Why did RooCon fail?" Can you blame it on the weather? (It was a nice day.) Not really, that's too easy an excuse. Was there something wrong with the con itself? I do not think so. Interesting that many students told me, "Oh, I would have gone if you had so and so. Well, hey, just give me $10,000, no problem. I feel I had non-SF elements there to draw in students, i.e. THE SIMPSONS, but when I would ask "What would you like to see?" the reply was "I don't know". I believe it failed due to something more powerful in Old Lyme than money and that is the power of a keg party. The majority of students were at a house getting wasted. Okay, fine, but do not try to pass blame on me. I guess they wanted their cake and [to] eat it too. In a way, they did get their cake. It just cot a little more than expected when the bill came. (Here comes the soapbox.) This is not the only fundraiser to be deep-sixed by alcohol. A good So RooCon was a success. It still has yet to be topped by a fundraiser of equal size and complexity. In fact, there has been nothing close to the scale of that convention since it happened. I occasionally get the question, "Will there be a sequel?" The answer is not in Old Lyme. There are some good things though. I met Elyse, Pat, Jude, Dawn, and a host of other nice warm people. I did what I wanted to do and did it well. If there is one thing I have learned from RooCon is if you have a dream, go for it. Let nothing stop you. You may not succeed, but in the end you are always the winner.... [3]