Revelation is a K/S story by Phaedra Morgan. 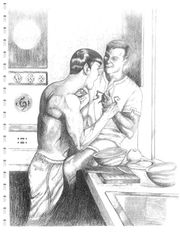 Linda Wan ("Want a Bite?") -- [nominated for a 1999 STIFfie Award] -- "Linda is one of my favorites of the new K/S artists. I’ve seen some of her other work as well and you will be in for a treat when these are published. Her work gets better and better and this piece is absolutely adorable. I mean that totally even though I am known to not be a K/S domestic aficionado. (Kirk and Spock housekeeping! Aaargh! Run for the hills!) So even though this portrays Kirk and Spock in domestic tranquility, I think it’s fun and creative. And just what is that that Spock is taking a bite of, anyway? I love the neat touches in this scene—like the tiny Vulcan symbol on Spock’s pajama bottoms and on the oven. I think that’s the oven. Or maybe it’s really the replicator. That’s more like it! Seriously, I really appreciate the completeness of this artwork—and that isn’t easy to do. [1]

It was published in the print zine Beyond Dreams #1.

"Kirk asks to share a bed with Spock after McCoy gets too friendly in his sleep but then finds that he isnʼt bothered when Spock does the same thing."

“Revelation” is an eleven page story that is a first time K/S story. It’s a variation on the making-advances- when-people-just-happen-to-be-sleeping-together plot. It’s a pleasant story with basically little conflict aside from a temporary awkwardness between Spock and Kirk as they try to get it all together when both are wide awake. It’s a feel good, warm fuzzy type of story when you’re in a mellow mood and can’t be bothered by angst. [2]

With the Enterprise going through decontamination at a starbase, Kirk has to share a room and a bed with McCoy, next door to Spock. It’s really funny when McCoy, in his sleep, comes on to Kirk and drives him in the middle of the night to Spock’s bed. There’s no rest for the weary in Spock’s bed either and there Spock makes sexual advances in his sleep. But this time, Kirk doesn’t flee or resist. So funny in the morning when McCoy finds out, but Kirk or Spock would never reveal the truth to each other and go along trying to figure out if the other knows or not. And I laughed out loud at McCoy’s murmuring: “That’s it, baby. Come to Daddy. I got a present you’re gonna love.”

A mix up with hotel accommodation while on shore leave means Kirk has to share Dr McCoy’s room. When the doctor makes a nuisance of himself by making amorous moves on Kirk in the night, thinking he is with a woman, Kirk decides to share with Spock instead, which has unforeseen consequences which leads to Kirk thinking about Spock in a whole new way... Although not very long, this is a well written tale which I enjoyed. It was very interesting to see the main characters in a relaxing mood rather than coping with a crisis on board the ship. [4]