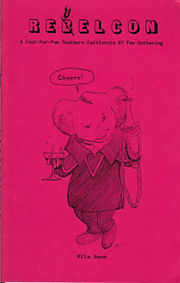 RevelCon (on the flyer: "Rebvelcon") was a 1989 fan-run Blake's 7 convention sponsored by Blake's Revels.

It was a "Just-For-Fun Southern California B7 Fan Gathering."

There was a dealer's room, an art show, filk singing, a fiction round robin, short story contest, role-playing games, videos, panels, and a "Blake's Wake." It had a celebrity guest of honor, Terry Nation.

One panel was a "Blake-A-Holics Anonymouse (A How I Got Hooked on B7 Encounter Group.)"

Welcome to the Rebvellion! Last year several of us San Diegans went to ORAC in San Francisco. We talked about how it would be nice to have a small get together in our neighborhood and invite down the fairly new to Blake's 7 fans from Los Angeles. The idea of a one day event at SDSU was bantied [sic] about, but nothing was decided. Pearl Stickler (the crazed idealist of San Diego) mentioned the idea of Terry Nation. We informed her that if we held an event in San Diego, he'd attend. By the time ORAC was over, and Pearl and Jean Graham (encourager of the crazed idealist of San Diego) were safe at home again, that small party had become a rather large one -- REVELCON.

Fans were encouraged to add at least a page to the round robin story and to make a submission to the short story contest: "No explicit sex, no slash, and no gratuitous bloodbaths. This is not a personal, but a convention policy."

One panel was a slash panel: "At Revelcon in San Diego, we had a slash panel, and Terry Nation presided. He discussed the issue maturely and rationally. We didn't seek his approval and he didn't seek excuses. The panel broke up with UNDERSTANDING on all sides. Most all problems can be cleared up in a rational, mature DISCUSSION." [1]

From the list of requests from the committee in the program book: "Fanzines. What you publish or read is your business. What you offer for public viewing is ours. Terry Nation states, 'I don't believe in any form of censorship, but please be discreet.' We ask that fanzines containing "slash" fiction please not be in view of the public areas of the hotel. Flyers may be placed on the flyer tables or on dealers' tables."

From the program book: "Blake's Wake" was "our dead dog party, an end of the con party that's usually for the convention workers only. Well, ORAC held a "Dead Travis" party with the whole convention invited and we had a great time, so we thought we'd do the same... The sinners of all our games will be announced during this event. Food and drink will be served at no extra charge, and for your viewing pleasure, Blake's 7 and other music videos will be screened."