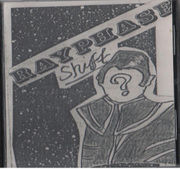 Rayphase Shift is a Doctor Who recording on CD compiled from material that had been on a series of audio tapes. There were fourteen issues.

For other similar zines, see: Doctor Who Tapezines.

Made by fans for fans. In the late 1980's and early 1990's, these tape fanzines shot around the country as Whovians everywhere searched for any information on what was their best and most beloved show. Here reproduced for the first time and transferred onto CD, you can hear how fans thought of past seasons and of up and coming Video releases at that time. [1]

Rayphase Shift was a title I suggested, but this was rejected by Warren. With my mates Keith Musselwhite and Paul Chandler also starting tapezines, the crunch came in the summer of 1989. I just had to get on with it!!! I left DWAS to its loud opinions and found a suitable soapbox at last… I was the governor on this, so I chose the title - Rayphase Shift (a stand-out piece of technobabble from Pip and Jane Baker’s last episode of The Trial of a Time Lord - I luuurve technobabble!). With a few stories of tape, a jack lead, a veteran of another tapezine around the corner (Andrew Candish) and only a C60 with which to put the world to rights, I set to work. One asthma attack, a catch phrase (“From the depths of my millionaire luxury recording studio in Los Angeles - adieu!” - such sarcasm!) and a crap cover (the first of many) later, the first RPS (as it became known) was created. Distribution at this stage was mainly to friends only but reaction was positive. Then Warren was heard to say, “When is Issue 2 coming out?”. This was a question that threw me as I had assumed that, after 60 minutes of my whimsical subversion, I would be in the stocks. RPS 2 was swiftly commissioned and the elements that made the tapezine unique began to take shape. There was Double Duds, a vindication of two Doctor Who turkeys (labelled wrongly, so cried the RPS team), which often defended the undefendable. There was the regular use of Richard Addinsell’s Southern Rhapsody as the adopted theme. There was the team: the biting, weary zaniness of Keith Musselwhite (veteran of many tapezines himself), the whimsy and wurlitzer of Andrew Candish, the intellectual and witty Andrew “Trowby” Trowbridge, the off-the-wall Paul Chandler and Peter Davison’s faithful devotee, Elaine Bull. Each issue came with its own theme. Not for us a Doctor special or an Ace special. The themes were as off-the-wall as the presenters were: eccentrics, time and complexity, music, the Traken football team (not guilty - I didn’t do that issue!) and even anti-matter all had their own issues. The aforementioned “luxury millionaire recording studio in Los Angeles” was of course, in reality, my own bedroom in West Harnham, Salisbury, where most of the recording took place. The tape recorder I used was basic but resilient, and the sound system I used to supply the music was less than a year old but was clapped out already (a display model). Subsequently there were a lot of jokes about the sheer cheapness of it, even for an amateur production. We stepped this up in later issues, getting deliberately cheaper as we went, sometimes merely impersonating clips and even backing music! The humour that came from this became the RPS calling card and was a team effort. As this retro-technological oddity was advertised in CT and the likes of TV Zone, favourable comment was heard from Joe Fandom. On hearing RPS 4, Gary Russell told Andrew Trowbridge (a key influence on the tape) that we needed help - and he meant it (RPS 4 did - there were some unforgettably dull moments!). However during its run, it enjoyed three good reviews in CT. During 1990, it acquired the self-inflicted slogan, “It’s Wacky and Tacky” - a catchy and honest legend. Alas, this caused confusion in later issues. Upon reading adverts, people would ask me for copies of “It's Wacky and Tacky Rayphase Shift”. I found a flip side to “fame” however. In the course of my editorship of Rayphase Shift, I was faced with a letter from someone believing themselves to be the Giant Robot; an attempt to arbitrarily hijack the cherished (if proudly naff) artwork covers; a request for a job from a professional artist who believed my production was to feature pages of lavish artwork (I was a shop worker on minimum wage, for crying out loud!); a snooty Star Trek role player who refused to reveal his first name and deserted us after Issue 6, for our being too silly. And who could forget the American gentleman who paid in springs (in reference to a quote from Dudley Simpson) and a cheque for all previous issues that didn’t even cover the conversion fee! On the upside, America, in the form of Rachel Sinclair and Brian Hunt, provided some wonderfully game features and I cherished their involvement. I only wish I could have held onto them till the end of the run. Neil Hogan of Doctor Who 2000 emerged from Australia and we worked on each others creations. From the North came Tony Darbyshire, whose brilliantly funny writing proved very popular. To this day, I have never met him. If you’re reading this Tony, you were great! RPS was undoubtedly influenced by the other tapezines I had bought (Sonic Waves and UNIT Tapezine in particular) but it was principally about having some fun with the show and the friends that came from it. We all sent each other up something chronic, producing what I came to call a “round the camp fire” atmosphere. It was also about celebrating the uncelebrated. [2]

Rayphase Shift 1 This edition "features two convention snippets, one of Richard Franklin and the other being Ian Marter who is now sadly no longer with us. If you want to travel back in time and listen to how it used be A Doctor Who fan then this series of CD's will be for you. Lasts just over one hour and full of very informative Who news of that time."

Rayphase Shift 2 It is the "Christmas Special late, late, late, let-your-hair down issue starring Andrew Trowbridge, Warren Langdown, Andrew Candish, Elaine Bull, Paul Chandler, Keith Musslewhite all cheered on and edited by Nick Goodman." "This particular CD set of two is the second in the Rayphase Shift Series. It lasts for just under 90 minutes and as said above comes on TWO CDS each in their own individual case. REMEMBER this is a fan made Fanzine originally available in the late 1980’s."