Sonic Waves is a Doctor Who tape zine. There are seven, and they were originally released between November 1984 and March 1987. They contained roughly twelve hours of listening.

the tape zines in their original format 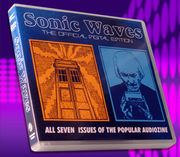 For other similar zines, see: Doctor Who Tapezines.

Sonic Waves 1 was released in November 1984.

Sonic Waves 4 was published in October 1985.

Paul Hewson and I were school friends who were brought together through our shared interest in Doctor Who... We had seen a small number of tapezines advertised in Celestial Toyroom, and that fired the idea, really. Over the next few months, we picked up a few, including Zero Room, Unit Tapezine and The Logopolitan, to get an idea of what producing a tapezine might entail, and how we might go about planning our first issue. The first thing that occurred to us when listening to these other tapezines was that, at that stage, only a handful of producers had really cracked the sound quality issue, and so one target we set ourselves was to ensure that the recordings we issued would be as good as we could possibly make them. By time we came to record, I had been on a audio visual training course for a year and so I probably had a bit of an advantage in this area. However, the professional equipment I was using at work and on the course was not available to me, so Paul and I had to improvise with what we had and buy what we didn't as affordably as possible. Unfortunately, this commitment to sound quality proved to be a double-edged sword, in that after we had recorded well over half an hour's worth of material for the first issue (called Sonic Force at that time), I chanced upon a better recording method and together we decided to re-record everything from scratch. During this re-evaluation Sonic Force became Sonic Waves and Paul gradually became a little disenchanted, as while it was fun, producing a tapezine was a long-winded, time-consuming and demanding endeavour. For this reason, Paul ducked out about halfway through the recording of Issue 1, and I ended up as sole editor from then on. The reaction to the first issue was positive, but I thought there was much that could be done to improve Sonic Waves. Much of the first issue had been given over to soundtracks recorded at the Longleat Doctor Who Celebration of 1983 (and while researching this site, I discovered that Zero Room also featured material from Longleat in its first edition!). This was, I still believe, a valid inclusion, but it seemed too easy a way to fill up the tape, so in the future, I made an effort to produce and commission as much original material as possible. Of course, in the fifth issue, I reneged on this decision, as I had been lucky enough to have Sonic Waves designated the official magazine of the Leisure Hive II convention in Swindon. This meant more or less the whole of that issue was given over to recordings and interviews made specially at the event, which typically I was unable to attend! Fortunately, Jean Riddler volunteered to be Sonic Waves' roving reporter in Swindon, and did a tremendous job, her natural effervescence bringing everything recorded wonderfully to life. The Leisure Hive edition was one of two Sonic Waves specials, the other being a Season 22 review special which took a thorough look at the then most recently broadcast Doctor Who series.

A wide variety of contributors considered the stories making up the season and focused also on particular themes, such as violence and the change to forty-five minute episodes. One of the absolute scoops for Sonic Waves was our regular feature, A Letter from the Doctor. These were recorded especially for us by Colin Baker, and featured in most editions, including the first. Colin would discuss what he was currently working on, his thoughts on the stories that had been broadcast, and his plans for the future... Midway through the tapezine's run, Daniel Cohen offered me the chance to include original comedy sketches in Sonic Waves. Right from the start, I had been keen to keep listeners on their toes and never able to predict what the magazine would deliver, so this was ideal. The sketches, which began with Doctors in Distress (a spoof on Ian Levine's charity single designed to 'save Doctor Who'), proved very popular with most listeners, although some inevitably thought it not to their tastes - comedy is a great divider, after all. The comedy team comprised Daniel, Adam Vanger and Steve Watts. Sonic Waves drew to an end with a double issue lasting three hours, which saw the audiozine destroyed by Vogons (of Hitch-Hiker's Guide fame). This was trailed by an advert in Celestial Toyroom in the form of a fake news report. In its time, Sonic Waves achieved 22nd spot in a DWAS Fanzine Poll (something of which I was very proud), had a team of highly talented contributors, including Matthew Sweet, who is now a professional journalist, Jim Mortimore, who went on to write for Virgin and BBC Books and Nicholas Briggs, who now provides the voices for the Daleks and most other monsters in Russell T. Davies' Doctor Who revival, among many other things.

Sales figures for Sonic Waves averaged about one hundred an issue - which caused duplication issues - and slowed down production of new issues, since the same equipment was used to dub copies and make new Sonic Waves issues. In that respect, the audiozine was something of a victim of its own success. Purchasers could order copies by sending the requisite blank tapes, a nominal fee (normally 25p in coins) to cover administration costs and the printing of the covers and a stamped addressed envelope for the return of the cassettes. Looking back on Sonic Waves, there were good bits, bad bits, some completely embarrassing bits - but overall, I'm still proud to this day with what was achieved with basic equipment in a poky bedroom at the parental seat on Shooters Hill. [1]

The tape zine were re-released in early 2012 by the original creator in this format: MP3-DVD discs.

[It] brings together all seven original issues of Sonic Waves audiozine, originally published between November 1984 and March 1987, totalling some twelve hours of listening. Contents include contemporary reviews of 1980s Doctor Who television programmes and events, interviews with the stars, otherwise unpublished audio letters from the Sixth Doctor Colin Baker, convention coverage including interviews and a desperately embarrassing tirade by myself as editor condemning the 1985 cancellation. You'll believe a grown man could blub at any minute... Also included on the disc are additional, previously unpublished audio interviews with actors John Levene, Laurence Payne, Nicholas Courtney and Nabil Shaban, all conducted in the late 1980s, plus an 'original soundtrack' of music composed for the magazine and the following PDFs. [2]

Contents of the New Edition